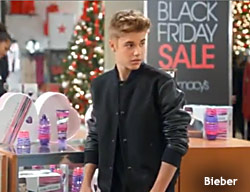 As retailers roll up their sleeves for the onslaught of Black Friday shoppers, a new study from the National Retail Federation finds that this year, virtual deals will be virtually everywhere: 97.3% of online retailers will offer at least some type of deal or promotion during the Thanksgiving weekend. That’s an increase from 90.2% last year.

And with more brick-and-mortar stores announcing that they will open their doors on Thanksgiving Day to woo consumers, the survey finds that online retailers plan to follow suit: 45.7% say they intend to offer those specific online deals on Thanksgiving.

The survey, conducted for the NRF’s Shop.org arm by BIGInsight, also reports that 85% -- a record -- intend to create promotions specifically for Cyber Monday. In last year’s survey, 78.4% said they would do so last year.

On cue, Walmart.com just announced what it claims are its most aggressive Cyber Monday prices ever: First, it is starting its event Sat., Nov. 24 -- two days before Cyber Monday. Second, in some case, discounts are in the four figures, such as a 55” Samsung TV for $1,500, a full $1,000 cheaper.

The retailer says it is also beefing up its online, mobile and social options -- including perks for liking local Walmarts or downloading its shopping app -- with these “connected” customers learning first about daily specials. And it has also created an interactive store map, which enables shoppers to view Black Friday specials including price, product description and location within each store.