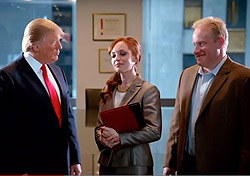 Last year, real estate company Century 21 made its first appearance during the Super Bowl, with a television commercial that featured celebrities such as Deion Sanders, Donald Trump and Apollo Anton Ohno, working with a super-competent Century 21 agent, who bests them in negotiations, house displays and speed skating. In this age of one-to-one marketing through digital channels, it might seem incongruous for a realty company to employ such old-school mass media tactics, but as CMO Bev Thorne explains, the significant investment (30-second spots are going for $3.8 million this year) is more than worth it.

Q: Why return to the Super Bowl?

A: We had a fabulous set of results in the 2012 Super Bowl. That return to the Super Bowl showcases our Century 21 agents in front of the largest television audience possible. What we really love about it is that those conversations and that showcase for our agents are in the American home, which is the center of the service we provide.

Q: What’s the value in being on such a big event? Obviously, it’s a big investment you have to make.

A: The value is -- it’s a lot of people to be in front of. It’s the largest TV audience of the year in a single day. Last year, it was over 111 million people, and so it positions our agents as “Smarter, Bolder, Faster” right in the center of the conversations in the home. There is no better opportunity or place for us to showcase our brand and our agent capabilities.

Q: Is there value in big events, or is money better spent in digital or some other medium, especially when it comes to home buying, where a lot of research is done online? Would your investment not be better in one of those areas?

A: We certainly utilize online as well. It’s a far more targeted approach. An advertisement on the Super Bowl is a brand play, and so we’re speaking not only for those that are in the process of buying or selling a home, but to the broader audience as well. It is a brand preference play. We follow that up with a 360-degree marketing campaign. We certainly advertise appropriately to those buyers and sellers who are active in the market. And they’re typically doing their shopping online, and we advertise in front of them as well. We don’t do one in lieu of the other. We do both. This kind of investment more than pays for itself in terms of the returns we saw in 2012.

Q: What did you learn from last year’s appearance that you’re applying to this year?

Can you be more specific?

Q: How will this year’s appearance be different from last year’s?

A: Let me tell you one way it’s the same. We will absolutely utilize our same national campaign and theme, which is “Smarter, Bolder Faster.” We will again work to showcase Century 21 agents and their capabilities front and center, so that the consumer understands what they get, and why we’re encouraging them to reach to a Century 21 agent if they’re involved in a home-buying activity. One way that it’s different:  Last year, we were at the tail end of the third quarter. In terms of making bets, that one paid off. But as you know, that’s [something] we couldn’t forecast in advance. We were very gratified that the audience peaked at the tail end of the third quarter, so we were right where we wanted to be. This year, we’re betting that it will be equally appropriate to be in the pod that comes shortly after the end of halftime. We will be at the end of the first group of ads that play after halftime.

A: We don’t think lightning strikes twice. We think that’s when everyone checks back in. To be honest, they’re all safe bets, if you will. We’re in the Super Bowl. We’re breaking down to a finite assessment here.

Q: A lot of Super Bowl advertising is about increasing the conversation during that run-up to the game and immediately after. What else are you doing to increase that conversation among the general public?

A: That will become defined more and more as we get closer to the game. We will certainly reach out via social media platforms, and perhaps more importantly, we will reach out through our system members for local activation. We’ll magnify and multiply that impact in each local market, as independent brokers so choose to activate. Last year, we were gratified to receive a tremendous amount of coverage, perhaps in large part to the inclusion of celebrities in our ad. There are a lot of ways to do that, and we’ll seek to do that again this year.

Q: Will you be using celebrities again?

A: We are still in the process of weighing all of our options, and have made no decisions yet, other than the very clear decision -- and we will be there.

Q: Are you planning to advertise during other event programming, such as the Academy Awards? Have there been discussions about the rewards of these event programs paying off in terms of advertising?

A: That is literally our strategy. Our strategy is to position our Century 21 agents in the middle of what I call “iconic media events.” Those events are not only sporting events, but they are many times sporting events. Hence our engagement last year in the Olympics, our sponsorship of the U.S. men’s and women’s soccer teams. And yes, you cited another one of those iconic media events that absolutely we are looking at, but I have no announcements to share with you today.