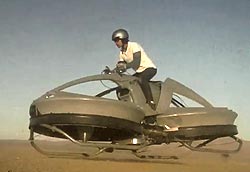 Honda is heralding the arrival of its U.S. market icon, the 2013 Civic, unveiled at the Los Angeles auto show last fall. The campaign -- via long-time agency RPA -- comprises four TV spots, one of which debuted in the Rose Bowl on Tuesday. The new ads have "found" video content to talk about entrepreneurial spirit of inventors and Honda’s engineers. There are more than 10 different inventors portrayed in the spots.

The effort, which also has print and digital elements, mixes product messages with the company's corporate mantra around innovation and continuous improvement (the Japanese philosophy of Kaizen). Three of the TV spots are for the Civic Sedan, Si Coupe and Hybrid, respectively, and a 60-second spot -- which aired during the Rose Bowl -- features all three of the vehicles.

Ads showing both ersatz and commercial innovations (the Brompton folding bike, the laser keyboard, the 4moms origami stroller) are paired with Honda's own corporate content that tout the 2013 Civic, and the Honda racing program, but also Honda's ASIMO robot, and the manufacturer's foray into the wild blue yonder with HondaJet.

“We wanted to not only showcase Honda's latest example of [its innovation philosophy], but embrace the other...dreamers and doers out there who share our way of thinking," said Jason Sperling, SVP, group creative director at the agency, who adds that the campaign is a kind of innovators "group hug.”

Ellen Kuras, who was behind the lens for films like “Eternal Sunshine of the Spotless Mind” and “Blow,” is director of photography, and the ads are set to the music of Santigold.

The agency says the new ads will air during prime-time rotation on ABC, CW, Fox, NBC, cable and during NBA and NFL AFC Wildcard and Divisional games, as well as in nearly 60 markets during the BCS Championship.

Honda is also going with spot buys during the broadcast of the Grammy Awards on Feb. 10 on CBS. The company will air the 30-second ads in its 60 top markets during the show, and Honda will run a gatefold print ad in “Entertainment Weekly” and a YouTube masthead takeover is scheduled the day after the show.

Print will run in ESPN The Magazine, Elle, Food Network Magazine, InStyle, GQ and People. Online ads include home-page takeovers on Yahoo and MSN, full-episode streaming and within “March Madness on Demand” and “NFL Everywhere.”