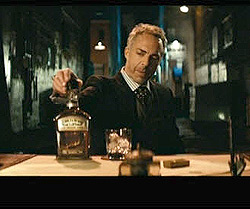 Jack Daniel’s’ super-premium Gentleman Jack Rare Tennessee Whiskey is getting its first fully integrated marketing campaign – including its first TV ads -- since its launch in 1988.

Gentleman Jack’s U.S. volume has more than doubled since 2006, including a 4.7% increase last year (to 267,000 cases), according to Impact Databank data cited by Shanken News Daily.

Brown-Forman will spend approximately $7.7 million on the Gentleman Jack campaign in 2013, and continue it in 2014.

The campaign’s creative, from Arnold Worldwide, uses the concept of a “secret society”  dubbed “The Order of Gentlemen” -- open to those who “order” Gentleman Jack and become brand advocates.

The first TV spot, “Secret Meetings,” premiered during the launch of Anthony Bourdain's “Parts Unknown” on CNN on April 14.

That ad features veteran actor Titus Welliver (seen in “Argo” and other Ben Affleck-directed films, as well as television and theater) manning a desk in a dark location that appears to be somewhere in the bowels of a train or subway terminal. Welliver explains that “The Order of Gentlemen” is Gentleman Jack -- “the twice-mellowed Tennessee whiskey men order when they want to feel like gentlemen.”

“A society? I suppose we go around wearing rings and having secret meetings,” he says, showing a glimpse of a ring as he checks his watch and proceeds down a dark alley. The spot ends with an onscreen teaser for WhatIsTheOrder.com, a dedicated microsite that’s the focal point for the campaign’s Facebook elements.

JD is using out-of-home and online advertising to drive men to the microsite, where they will be invited over the next few months to join “The Order,” take challenges and earn rewards (the more engagement, the more rewards unlocked).

The campaign, which also includes print, targets “men who are transitioning from their ‘carefree single’ days into more maturity,” said John Hayes, SVP managing director Jack Daniel’s. “These people still have a fondness for [regular] Jack Daniel’s,” Hayes adds, but “as they grow up, Jack Daniel’s might represent a bit more of their younger days, and they are looking to step up.”