Travelocity? There's An App For That 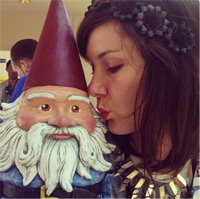 Travel booking sites: if you’ve used one, you've used them all. Just give me the cheapest price and we're done. Travelocity would like you to not see things that way. The travel platform -- which all of us associate with a certain yard gnome who shows up in exotic places -- is boosting social and mobile efforts on the heels of what is perhaps its largest campaign launch to date, "Go and Smell the Roses" via Durham, N.C.-based McKinney.

The new program includes a mobile app, “Let’s Roam,” and a Web-video series with travel writer Courtney Scott, who also does Travelocity's "The Window Seat" microsite. She will be doing once-per-week segments on various destinations. The gnome will co-pilot (on her blog is a recent item with the gnome at Coachella).

The new app is designed to help plan trips by creating itineraries from advice, information, pictures, videos and just about any other kind of content from others on their social networks who have been there, done that. If nobody in their networks have been to a given destination, the app brings in Travelocity content.

The application is not intended solely as a marketing tool supporting the brand's personalization, inspiration and engagement ideals, explains Brad Wilson, CMO, North America. He tells Marketing Daily that it is also a cure for a side effect of digital access: anything you need is out there, but there's no single place to get it. The new app, he explains, funnels relevant social content to the user -- reversing the usual process in which the user has to be digitally peripatetic, veering around inside the travel funnel to rummage opinions and reviews.

"The average time people take to book a trip is now around 42 hours on 13 Web sites," he says. "But there isn't [one place] from a trusted brand where people can get the best price, get a personalized experience on the front end, and a place to share content. There are tools out there, but they don't solve the whole equation, and they can't do it at scale."

He says the social content is there. "Seventy-five percent of people ask their friends where to go on a trip. Seventy-five percent of people on trips post something to share on social network." He adds that the app allows users to create an "inspirational" travel bucket, as it were, of videos, pictures, blogs and posts from one's social world. One is able to store socially aggregated "Let's Roam" itineraries in a Pinterest-like frame format, per Wilson.

All of which constitutes a big change in brand direction for the company. "When I joined I was told not to differentiate beyond price," he says, adding that a "character camp" experience in which Travelocity key executives participated helped the company come up with the brand idea. The point, says Wilson, was to hone in on the brand story, which wound up being "'Travel makes us better." "That is the DNA of this company: we are a passport to freedom."