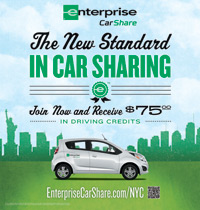 Zipcar does big business in markets like Boston, Philadelphia and New York, and now Enterprise wants to build its share in those cities too, under a unified brand, Enterprise CarShare. The company is touting the new service with a multi-year campaign comprising advertising, street teams, events, PR and social media, and even fixed home-plate signage at Fenway Park in Boston.

Don’t expect out-of-home to include billboards on the interstate. The placements are directed to people who take mass transit, with placement on transit vehicles, trains, platforms, plus targeted paid media in digital, mobile and social channels.

The program, which has a hub at www.EnterpriseCarshare.com, puts street teams in transit stations, and includes larger events whose aim is to educate consumers about how the service works, with participants getting immediate car share credits, per the company. Publicity efforts for the campaign include word-of-mouth activations, local grassroots events and media and blogger relations.

Enterprise CarShare unifies PhillyCarShare in Philadelphia and Mint Cars On-Demand in Boston and New York, acquired by Enterprise in 2011 and 2012, respectively. Said Jim Stoeppler, Enterprise brand director, in a statement: "We're placing a strong emphasis on car sharing as part of our overall business growth strategy."

Ryan Johnson, assistant vice president of Enterprise CarShare, tells Marketing Daily that the company is looking to expand in other markets, with a focus on university, business-to-business and retail sectors. "We already have the scale and structure to implement car sharing in virtually every urban market."

Johnson says car sharing is a natural extension of the local car rental service "That Enterprise Rent-A-Car pioneered, enabling Enterprise CarShare to enhance and resize car-sharing fleets quickly based on consumer demand and community needs." One benefit, he says, is that the car-sharing program can exploit Enterprise Rent-A-Car's existing fleet, "allowing us to have more newer, cleaner and well-maintained vehicles and a lower member-to-car ratio than any other car rental or car-sharing company."

Since Enterprise Holdings acquired Mint Cars On-Demand last year, membership in New York and Boston has grown over 40% and the fleet has increased 100% in the two cities, per Johnson. "We’re looking to increase it by another 50% this year."