'Show Me' State Wants To Show You 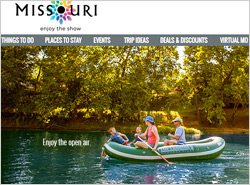 Missouri Tourism and its advertising agency of record, the St. Louis office of Hoffman/Lewis, is hoping to get people near Missouri to come over the border to check out rivers, parks, cities, and even a hidden gem for scuba divers concealed in an abandoned mining town.

The effort -- carrying the tag “Enjoy the Show” -- comprises seven television spots, five print advertisements, seven billboards, an updated online presence and a social media strategy, spotlighting an array of places to see in the state.

The ads show clips from places like the Bonne Terre Mine, a gigantic abandoned mine now full of crystal clear water in whose depths is preserved the village that supported mining operations; Chaumette Vineyards; St. Louis Zoo; and Lake of the Ozarks State Park.

Mark Manion, the agency's creative director, said the point is to avoid the obvious things about the state, such as a certain half-oval structure. "You don’t see the Arch once in the work," he says. "One of the objectives of the creative team was to bring to life places and situations that make people say, 'Wow, that's Missouri?!' All tourism ads should do that, but a state like Missouri is bound by preconceived notions around St. Louis, Kansas City, and Branson."

Mark Schaeffer, CEO of Hoffman/Lewis, says the campaign is intended to appeal to consumers within a five-hour driving radius. "However, we are looking at more ways to make Missouri a more relevant destination for those beyond those five hours." He says the campaign is not the biggest fielded by the state's tourism organization, adding that the state has actually been cutting tourism budgets, although tourism is the second-largest industry in the state after agriculture. "You don't think of Missouri as a tourism mecca, but we got 36 million visits last year."

The campaign will run in all Midwestern secondary cities, per Manion. "The peak season is right now, so it will run through spring and summer. We run some fall media and then typically go dark in the wintertime." He says the long view is to make the "Enjoy the Show" a steady position going forward, since it's a differentiating identity. "We wanted a long-term theme line for the state -- getting value out of finding a broad position that's relevant, and sticking with it for decades."

In addition to focusing on outdoor attractions, nightlife, performing arts, family fun, and lakes, it also makes note of Missouri’s wine action. Manion says that Missouri is a wine-producing state. Show me.