Allergies? Zyrtec Will Take Your Dog For A (Virtual) Walk 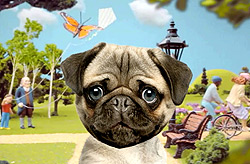 Allergy med Zyrtec has a new campaign floating around the social playground like, well, pollen. The central conceit: people with allergies can't just go outside on a beautiful spring day, so they have to stay inside. That causes duress for those around them, who not only have to deal with their contumely, sniffles, incredibly loud sneezes (we speak for ourselves here), but also can't go out and play. The latter is mostly an issue for pets, and the campaign highlight that.

The effort focuses on a unique digital app housed on Zyrtec's newish Facebook page. The platform comprises a rich animation of a park, on which is superimposed your pet. While your pet, whose photo you upload to the Arcadian world of the app, isn't getting a real walk, you can at least give him/her a virtual one. The campaign, via JWT New York, plays on the Zyrtec brand name, too: Furtec.

Eric Weisberg, executive creative director at JWT, tells Marketing Daily that people are experiencing the brand on all media touchpoints, especially online, so it makes sense to move content there. "We launched 'Parks Unleashed' about a year and a half ago. We had three million visitors in six weeks, and a lot of participation," he says, adding that the initial launch preceded the advent of the company's Facebook page. "So it was hard to share. But Zyrtec is becoming increasingly social, and we wanted to make this a central aspect of this [campaign]. So when you are building the experience around you by sharing with friends, it gets others to participate. Social is at core."

Colleen Sellers, group brand director of allergies at J&J's McNeil Consumer Healthcare division, says the brand has also migrated to a year-round position from what had been mostly allergy season activity. "I think, traditionally, we did do just spring, and a little in the fall. But having more of a year-round spread lets us be present in consumers’ lives; a lot of them have significant allergies." She adds that the benefit of a year-round marketing strategy is that it keeps the brand top of mind. "We found through research that we had amazing equity during [allergy] time periods; when we turned off, it dropped." Sellers says that while sibling brand Benadryl is the leader in category awareness, as it has been around the longest, and has strong equity with the general population, Zyrtec has done well with heavy allergy sufferers.

Zyrtec's AllergyCast app is the leading allergy application on iOS and Android, per Sellers. "We are always thinking of the opportunity to grow and create new concepts and utility; we want to do things that make the brand part of people’s lives in personal way."