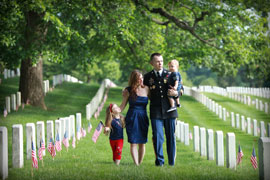 In the latest version of their ongoing Every Day Heroes program, Dollar General and Procter & Gamble are aiming to raise awareness for veterans and their connection to at-risk youth.

The two-year-old Every Day Heroes initiatives changes themes each month, and, throughout June, it focuses on Sparky Anderson, a vet who entered the National Guard through the Thunderbird Youth Academy (TYA), one of the National Guard’s 34 Youth ChalleNGe academies. Now a father, business owner and PhD candidate, he credits the program with saving his life, and is featured in a video campaign.

The point of the program is to “honor the everyday heroes in the communities Dollar General serves, people who don’t regularly receive a lot of accolades but are doing great things in their neighborhoods and communities,” she says.

Dollar General has routinely focused its cause efforts on military-awareness initiatives, winning accolades as a military-friendly employer. Earlier Every Day Heroes  efforts have also raised fund and awareness for such causes as literacy, general education degree programs, and efforts serving the African-American community.