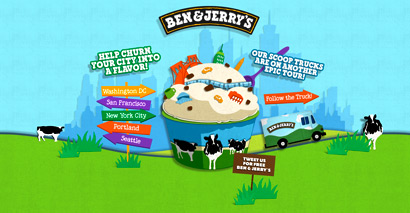 Ben & Jerry’s is asking residents of five cities to vote to help create and determine the names of new ice cream flavors that reflect their locales.

The twist: The brand will also be tracking specific attributes and activities within each city, like public transportation, traffic, parks and landmarks -- and these will also automatically cast votes for flavors or ingredients.

The brand’s Scoop Truck will be touring 11 cities on the East and West coasts over the summer. When the trucks are in Washington, D.C., New York, Portland, Ore., San Francisco and Seattle, the brand will tally specific activities.

In Washington, D.C., every on-time Red Line and Orange Line Metro train will count as a vote for either Cherries or Fairtrade Bananas. And in Portland, automatic votes will be cast for either Marshmallows or Graham Crackers, depending on whether a man walking through the door at Cartopia (the city’s food-cart pavilion) has a mustache or a beard.

(Data on subways will be gathered by tying into cities’ own arrival-tracking systems; other activities will be tracked manually or by other means.)

Consumers, for their part, can vote for flavors, track voting tallies and suggest their own flavor names by visiting a dedicated “City Churn” campaign microsite.

The campaign, the first from 360i for Ben & Jerry’s since it was named the Unilever brand’s digital agency of record in April, will employ video footage of unique happenings in each market in local, search and mobile ads, to drive consumers to the microsite.

In addition, the content will be used in the brand’s Facebook and Twitter presences. Fans/followers are being asked to tweet their own most creative ice cream flavor names, using their city’s City Churned hashtag.

The brand has been running its Scoop Truck tour/campaign -- in which consumers can tweet to ask Ben & Jerry’s to have the truck stop at their office or other location, to dispense free ice cream or Greek frozen yogurt -- for three years.

This year, the Scoop Truck will also serve as one of the campaign’s voting platforms. Once consumers have eaten their free frozen treats, they’ll be asked to use their spoons as “ballots” (vote by depositing their spoons in one of several recycling boxes marked with various ingredient names).

At the end of the Scoop Truck’s visit in each market, Ben & Jerry’s will host a "Community Build" day of local service, during which city residents will have a one-time-only chance to taste their exclusive City Churned flavor from the truck.