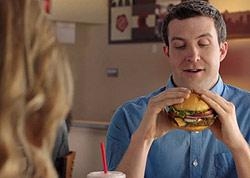 In August, the spot will also be aired nationally during coverage by NBC and NBC Sports of the Denver-based cycling event the USA Pro Challenge, for which Smashburger is a title sponsor.

Investing in television is something of a leap for any fairly young, growing brand, but Smashburger believes it has reached a stage at which testing the medium makes sense, the brand's SVP marketing and consumer insights, Jeremy Morgan, tells Marketing Daily.

The chain, which since its 2007 launch has grown to more than 208 corporate and franchise restaurants operating in 29 states and four international countries (and 2012 sales of $170 million-plus, per Technomic estimates), has thus far relied on social media, word-of-mouth, local print advertising -- and starting a year ago, radio. Its radio ads have proved highly successful, and are now airing in 25 U.S. markets, according to Morgan.

Despite its growth, unaided awareness levels of Smashburger in the markets it serves is about 20% -- and the chain believes that TV can up that awareness through the medium's ability to show (as opposed to just describing) the chain's unique "smashing" burger-preparation process and the juicy, flavorful burgers that the process enables, Morgan says.

As with all of the brand's marketing/advertising, the "What's Smashburger?" TV spot's creative is based on the mission conveyed by its tagline, "Smashed Fresh. Served Delicious," he says.

Definite used video's visceral power to showcase the product and the preparation process, but added interest by incorporating those sequences into a young man's description of the burgers to his girlfriend as he enjoys one of the burgers, notes Nate Watkin, the agency's co-founder and director.

Given Smashburger's newness, social media have always been integral to its marketing -- it actively employs Yelp, as well as Facebook and Twitter, and uses social platforms for market research and customer service, as well as promotion, according to Morgan.

Privately owned Smashburger, which offers regionally inspired burgers and sides and local craft beers in each of its markets, was the brainchild of Rick Shaden, funded by Consumer Capital Partners, a private-equity firm owned by him and his father Richard.