Chevy Silverado: A Woman And Her Truck 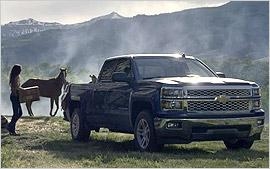 The second phase of Chevrolet's 2014 Silverado campaign is in the offing. The effort, “A Man and His Truck,” focuses on real men (and one woman) doing what they do.

The overarching campaign, “Strong,” spans TV, print, digital, social, CRM and in-dealership and will be in-market throughout the remainder of 2013.

Agency Leo Burnett says the first spot of the new work, called “Her Horse,” features a woman because about 15% of truck buyers are female, and many other women use the truck their significant others buy.

The spot, which launched on July 16 during the 2013 MLB All-Star Game, involves a competitive rider, who, after practicing with her horse, loads up her truck with gear, plus a horse trailer, and heads to the competition. The voiceover says, “A woman; a woman and her truck; a woman, her truck and a 1,200-pound passenger. And two bodies with one mind. And a ribbon that goes on her wall, not in her hair.”

"A vital part of telling a more multi-dimensional story about pickup owners was to shine the light on pickup women, people who inspire our owners for the same reasons and in very similar ways as men do," says the agency.

Two more spots will hit the airwaves next month, per Leo Burnett. Chevrolet made an effort with the new campaign to get away from the truck clichés, said Chevy CMO Tim Mahoney in a recent Marketing Dailyinterview. While the initial ads, under the "Strong" banner for the new Silverado, featured a new song by country singer Will Hope, the new ad doesn't use that track.

Chevrolet isn’t alone. The other pickup truck makers have also tried to escape from the gravitational pull of the Paul Bunyanesque motif, usually with a dust-coated guy throwing big items in the back. For example, Ram, in 2011, ran with a Wild West theme, with one of the ads, which touted Ram’s Cummins diesel engine, having the pickup facing off, in a Deadwood-type backwater, against big-engine machines like firetrucks and 18-wheeler haulers.

Toyota uses extreme stunts out in the desert, where a Tundra truck does things like haul a trailer up a burning roller coaster-style corkscrew ramp -- no CGI involved -- not to mention its stint towing the Endeavor space shuttle part of the way to the California Science Center in Los Angeles, of which Toyota is a sponsor.

"During our research” -- said Chevrolet’s agency -- “we asked pickup guys who their heroes were and what defined them. Inevitably, their heroes were cousins, fathers, grandmothers, and neighbors, people they knew intimately and people about whom the greater world would never hear."