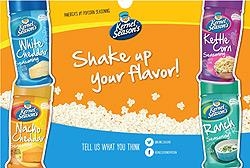 Kernel Season's, launched in 2000, has become the U.S.'s #1 popcorn-seasoning brand. Now it's pushing for accelerated growth with new packaging and a just-launched marketing campaign that is heavy on social media and digital advertising.

The company's sales have been growing by double digits (IRI data for the 52 weeks ended July 14 show the seasoning brand's sales up 17.5% in U.S. food/drug/mass outlets versus the same period year-ago).

And last year, President Brian Taylor (who conceived the products in college and founded the privately owned company soon thereafter) brought in a new investment group to provide "new resources and expertise to drive growth" -- including highlighting the seasonings' versatility outside the popcorn aisle, he reports.

The brand's new packaging, which started reaching retail shelves last month, features an updated logo. The colors identifying each flavor have been extended from the caps to the entire background of each shaker, and each shake-on flavor is spotlighted via larger type, as well as larger images of the natural ingredients inside. (There are more than a dozen flavors, ranging from simple butter or white cheddar to buffalo wing and milk chocolate caramel.)

In the U.S., the shake-on seasonings -- marketed as "no guilt" popcorn enhancements (all-natural ingredients, zero fat, five calories per serving, no MSG and lower sodium than competitive brands) -- are sold in more than 30,000 supermarkets and other mass retailers and 25,000 movie theaters, according to Taylor. (They're also sold in 30 other countries, mainly in movie theaters, with some retail distribution in some markets.)

The brand's new marketing campaign features a new tagline, "Shake Up Your Flavor" -- although its previous tagline, "No More Naked Popcorn," may also still be used occasionally, says Taylor.

The campaign includes in-theater and in-store promotions (such as shelf-talkers and new displays), as well as sampling (packets with coupons) in theaters and other venues.

Working with Boston-based Amp Agency, the brand is also significantly ramping up its digital and social media efforts. The emphasis is on content marketing to engage existing fans and build greater awareness of what Taylor calls "the popcorn revolution" through its updated social media pages.

According to the company, Facebook "likes" have been showing steady weekly and monthly growth (likes are currently at 129,000, versus 122,665 in June). That's been driven by high engagement: On average, each post generates 100 likes. On average, posts reach more than 8,000 users, and user reach peaked in July, at nearly 17,000.

The campaign focuses on online advertising and digital FSIs rather than traditional paid advertising.

In addition, the brand's Web site has been redesigned to reflect the products' new look and marketing theme, as well as to incorporate some additional consumer capabilities (and more recipes), plus a more sophisticated back end for analytics and marketing purposes.

Kernel Season's (which also markets popcorn and oils, popcorn party gift sets and popcorn poppers), has an online store on the site. That currently represents a "fraction" of its overall business, but is also growing, according to Taylor.