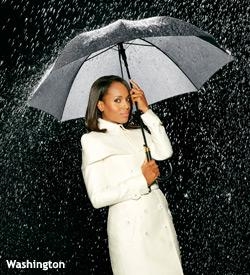 Saks Fifth Avenue is riding on some of the small screen’s most glamorous coattails, sponsoring the third season opening of ABC’s hit “Scandal.”

The show, which stars an impeccably dressed Kerry Washington as Olivia Pope, the ultimate political fixer, and features clothing from its Emmy award-winning costume designer, Lyn Paolo, has developed a fierce fashion following. But Washington is a fashion tour de force in her own right (recently named People’s best dressed woman), and as part of the promotion, she will curate a window installation at Saks’ New York flagship. Mercedes Benz is sponsoring the event, so the window will also sport a Mercedes Benz all-new 2014 CLA45 AMG, similar to the car used in “Scandal.”

In addition to a launch party, the promotion will feature in-store events, including cast appearances, and social media support. And some of Saks’ designer fashions and accessories are set to be showcased in upcoming episodes.

When she’s not sleeping with the president, tracking down corrupt operatives or rescuing vulnerable executives, Pope is best known for rocking Washington with looks from Giorgio Armani, Donna Karan, Calvin Klein, Michael Kors and Carolina Herrera. So several of these designer brands will also be used in Saks Fifth Avenue’s window installation, which will be recreated at stores in Beverly Hills, Calif., and Chevy Chase, Md.

The event comes amid big transitions for Saks. When its $2.4 billion merger with Hudson’s Bay Company is completed later this year, its two top execs, CEO Stephen Sadove and president Ronald Frasch, are leaving. And Hudson Bay has reached across the pond to tap Marigay McKee, a Harrod’s executive, as its next president.

While Saks, like many luxury brands, has been on a roll, posting 14 straight quarters of same-store gains, its most recent quarterly results were a bit below expectations, with comparable-store results rising just 1.5%.