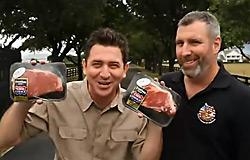 The Association of National Advertisers’ Masters of Marketing event this year is bigger than it's ever been. Bob Liodice, emcee, moderator, and wrangler, said there were nearly 2,200 attendees this year, 1,000 of whom are ANA members. And attendees got what they came for. Top marketers held forth on how to speak to consumers without speaking to consumers, but with consumers. It was about how to give consumers the keys to product development and marketing strategy, or at least the keys to the foyer. It was -- of course -- about social and mobile and where that's all going. And it was about great marketing campaigns yesterday, today, and next week.

Stephen Quinn, EVP and CMO of Walmart U.S., said it pretty concisely: Not only are marketers facing an uncertain economy and one that's on the mend, they're also trying to ride the bike and patch the tire at the same time, correcting mistakes and figuring out where media's going to be next month.

"Marketers have never had to face this before," he said. “Sam Walton used to say our boss is the customer, and right now the boss is struggling with a lot." He said individuals are also leading in terms of knowing how to make waves online, the success of videos like Gangnam Style being a prime example of who’s really in control. "No marketer could have created that," he said. “The disruptive factor isn't technology, it's the public, the customer who is forcing change in technology. It's no longer 'the brand that owns the customer makes the most money' -- it's ‘the brand that's owned by the customer.'"

He noted that Walmart has 34 million fans and half a million pieces of UGC per month. "Customers have taught us what is engaging to them. Social media has led to many innovations for us. It has made us more mobile.” And mobile, in the other sense, is an example of where technology is going. “It’s the first screen; it's very personal, but it is a huge opportunity at retail.” Two big problems are search and navigation; all that technology has barely become available to the real shopping experience, he noted, adding that when marketers flesh out how to apply those technologies, it will be huge for Walmart.

He said the company has also executed a strategy to change perception of the quality and freshness of its food, partly via the fusion of online with offline and through the realization of the premise that the CMO must also be chief innovation officer. The company has put different areas of creative, marketing and product strategy under one roof, and one example of the success of that approach has been the company's Steak-over campaign to get the word out about the quality of its steaks. "Steak-over campaign first involved innovation over the whole supply chain and by actually changing the quality of our offering, and then it was marketing's job to prove to the skeptical customer that we had the stuff needed [to prove our point]."

In addition to denoting premium steaks with a black packaging, the company did real-world tests, in which steakhouse steaks were clandestinely replaced with Walmart steaks; then Walmart filmed restaurant patrons' responses once they were told that what they had just enjoyed was meat from Walmart and its network of ranchers and butchers. Same drill with produce, with apples at a local stand replaced by Walmart's own locally sourced apples.

The last nugget: Marketers can succeed in staying on the bronco by using the ANA's resources and its knowledge committees. "This will help you partner and network; you have to be agile and learn as marketers. You must lead from a position of the purpose of brand. You need to be like a duck: on the surface you're calm and confident; under the surface you're paddling like crazy."