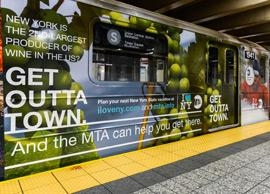 "I Love NY" just got bigger. A new deal between the governor's office and the Metropolitan Transportation Authority (MTA) is touting the state’s fall attractions, is the biggest tourism media commitment to date, and includes the first-ever total subway wrap for one of the subway lines.

The fall campaign, via BBDO's New York office, includes four “I Love NY” commercials that will air both regionally in 10 markets and out of state. Media buys include early morning national broadcasts, local news, sports, and cable networks with fall imagery which will lead into harvest, holiday and winter sports experiences in the state.

The media buy will also extend to area airports via relationships with the Port Authority. Assets include 6,400 ad posters in platforms, trains, subways and buses; video advertising at more than 100 subway entrances in Manhattan; and digital video boards located throughout Grand Central Terminal’s main hall and the Long Island Rail Road passenger areas in Penn Station.

Said Gov. Andrew Cuomo at a press conference for the new deal: “More than eight million people ride our state transportation system every day, which makes it the perfect vehicle to promote everything New York State has to offer tourists and residents. By partnering with the MTA, we are going one step further to get the message out: New York’s tourist destinations are calling, and the MTA can help take you there.”

The effort is backed by a $60 million commitment to encourage travelers on New York City and regional transit to explore the entire state this fall, and touts things like state wineries, museums, historical sites and outdoor attractions located throughout the service areas of the Metro-North Railroad and Long Island Rail Road, and beyond.

Thomas Prendergast, chairman and CEO of the MTA, noted that the MTA does promotional packages, including discount fares and seasonal attractions near transit footprints meant to do double duty: put more customers on trains and deliver tourist dollars throughout the 12-county MTA service region.

Kenneth Adams, Empire State Development president, CEO & commissioner, said tourism is the fifth-largest employer in the State of New York, supporting over 700,000 jobs and generating "tens of billions of dollars in revenues for the state and businesses."