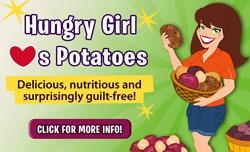 To convey potatoes' nutritional power and counter the misperception that they are the enemy for those who want to lose or maintain weight, the U.S. Potato Board (USPB) is teaming with its most visible partner ever: Lisa Lillien, better known as Hungry Girl. "This year, we're going into head-on battle with the myth that potatoes are fattening," says Meredith Myers, PR manager for USPB, the potato industry's marketing and research organization.

As food and beverage brands are well aware, Lillien reaches millions of weight-conscious consumers every day with recipes and food finds that are high on taste and nutrition but low in calories. In addition to a free daily email service with more than 1.2 million subscribers (and a 40% to 60% open rate), Hungry Girl has a Web site that draws more than 1 million visitors a month, an upcoming diet book, a recipes/cookbook series, videos, and a hit cooking show that airs on both the Food Network and the Cooking Channel, among other brand extensions.

USPB's new “Guilt-Free Potato Goodness” marketing campaign aims to harness Lillien's unique ability to speak directly to calorie-conscious Americans from a “friend in-the-know” perspective, as well as her flair for effective native advertising. “Hungry Girl has developed the kind of loyal following of weight-conscious consumers that fits in perfectly with our marketing objectives,” says Myers.

The campaign is designed to reach USPB's target audience: women 25 to 54 with kids under 18 at home.

Lillien -- who has frequently expressed her love of potatoes in her messaging over the years -- developed five potato recipes that will be showcased in ads on the Hungry Girl site, as well as on the USPB site, PotatoGoodness.com.

The recipes will also be featured in a print booklet to be distributed at food and other relevant blogger conferences, and potentially in supermarkets around the country, according to Myers.

The campaign also includes advertising and sponsored content on Hungry Girl's site and in the daily emails; promotions on HG's Facebook and Twitter presences; and a chat with Lillien on USPB's Facebook page (called Potatoes, Taters and Spuds) in December.

Lillien will do media interviews and make promotional press appearances, and she will judge a national, Facebook-based Guilt-Free Potato Goodness Recipe Contest. First prize: a trip for two to Los Angeles, including a meet-and-greet with Lillien at her new "Hungryland" headquarters.

Since the campaign launched on Sept. 19, there has been a 162% bump in traffic to the USPB's site, a 160% increase in USPB weekly recipe email sign-ups; and a 421% rise in page views for USPB's Facebook page (currently showing more than 22,000 "likes"), reports Myers.

The Guilt-Free campaign is the latest initiative in a 10-year USPB campaign conveying potatoes' nutrition and healthful benefits (which also includes ongoing programs for retailers and the foodservice industry).

Myers reports that in addition to the Hungry Girl elements, the organization is updating the creative of its four-year-old "The Many Sides of Potatoes" print ad campaign to focus on and support the same "nutritious and not-fattening" theme.