Kiosks Campaign Touts The Wonders Of The Philippines 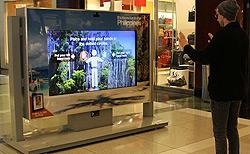 Anyone who’s been to the Philippines knows there’s a lot more to see than Subic Bay and the malls of Makati. People in the know know that any place in or around Manila is worth leaving PDQ, especially during monsoon season. Better places to see? The Chocolate Hills; Palawan; the rice terraces of Ifugao and a lot of places to rock climb and scuba dive, especially the latter.

To get that word out, the Philippines Tourism Board (PTB) is running an out-of-home program in major markets in the U.S. and Canada directed toward attracting younger, adventure-minded people to the country.

The effort centers on interactive kiosks that use gesture technology to immerse users in coral reefs and on mountains, where they can use hand and arm motions to control their virtual selves. Part of a digital campaign via 360i, the program, from Fairfield, N.J.-based Pearl Media is also tied to a new Web site in which real tourists give testimonials about the places they have visited.

According to a spokesperson for the PTB, the U.S. is still the second-biggest source of arrivals for the country -- with 457,819 visitors, as of Jan.-Aug. this year -- with visits growing at a 2.49% clip. Most tourism to the nation comes from the Asian region, however -- with Korea at the top of the list -- with a million visitors to the Philippines last year, per the Board. China is in third place.

The representative tells Marketing Daily that the organization is working to build its message globally. "We are trying as much as we can -- especially starting in 2012 when we did full-blast in our Marketing Campaign worldwide under the branding 'It's More Fun in the Philippines.'"

The PTB boosted promotional spend by almost 300% last year, then tapped BBDO Guerrero and Dentsu for media duties, per the rep, who adds that the country is the sixth-most-visited tourist destination in the Southeast Asian region. "But other SEA destinations are connected, so one can hop from a country to another via land travel; the Philippines, on the other hand, gets 99% of its arrivals via plane."

Tourism is contributing 6% to the country's Gross Domestic. "Our target is to increase this to 8% for 2013," says the spokesperson.

Josh Cohen, the CEO of Pearl Media, says the kiosk program will run outdoors in six markets -- Manhattan, Toronto, Chicago, Los Angeles, San Francisco and Vancouver -- over a period of three months. "The point is for consumers to find that there is more to the Philippines than what American media tends to feed us," he says, adding that the six target markets were chosen based on a combination of percentage of audience who has gone to the country and people who have shown interest in going there. He says the primary demographic is 22- to 30-year-olds -- "a younger demographic with the time and money to do a 20-hour trip. It's an ongoing campaign, and something we think is not typical for the travel industry."

There is also a social media element tied to the kiosks, where participants get a digital photo that captures them swimming or climbing that they can send to their networks and to the tourism site. Visitors who choose to “travel” at the branded kiosk will be entered into a sweepstakes to win an iPad and a trip for two.