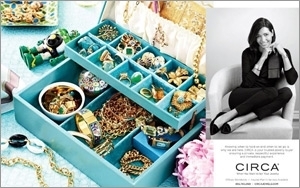 Circa and creative agency Sison & Overton developed the campaign around the notion that various life stages encourage people to resell their collections. Photographer Matthew Brookes handled the lifestyle portraits and David Prince was responsible for the still life images.

"The concept aims to demystify the process so that consumers understand that selling jewelry has become a highly accepted, accessible and financially rewarding practice," says Natasha Cornstein, Director of Brand Management, Circa. "Tastes changing, lifestyles evolving and relationships ending are among the more common reasons Circa's clients are selling jewelry."

Cornstein adds that "The campaign positions the practice as something any knowledgeable consumer should be doing – getting value from items that no longer speak to their current selves."

Also, the advertisements show a range of jewelry and watches that the company purchases, from gold earrings to an entire estate of rare, signed pieces. "We were fortunate that the service Circa offers actually touches on an economic trend that has been gaining momentum in recent months," says  Cornstein. "More and more consumers see purchases, particularly in the luxury market, as temporary investments that will hold value and can be monetized when they tire of them to fund a new item or experience."

The campaign is appearing in many upscale publications, including the New York Times, the Wall Street Journal, Palm Beach Post, and Washington Post. Ads will also appear in the March issue of Harper's Bazaar, Town & Country, and Departures. In the spring, the campaign expands globally to Hong Kong and Spain.