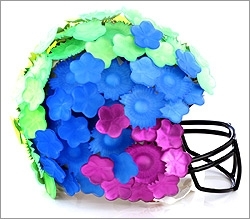 The intersection between New York’s fashion crowd and the National Football League is usually nonexistent, but the coming Super Bowl looks to be a big exception, with brands like Macy’s, Bloomingdales and Saks Fifth Avenue clamoring for a piece of the spotlight.

Macy’s is kicking the pig first, in partnership with the NY/NJ Super Bowl Host Committee, with a “Super Bowl Kickoff Spectacular.” The ticketed event (which is free) is scheduled to include performances by Daughtry and Goo Goo Dolls. Set for the Monday before the big game, Macy’s says parts of the performance are to be broadcast on Fox’s sports channels.

It will also include a 13-minute fireworks display, set to the tunes of such local legends as Bruce Springsteen, Alicia Keys, and Bon Jovi.

Bloomingdale’s, owned by Macy’s, has been in on the game for weeks now, taking to the social media world with a partnership with the Council of Fashion Designers of America. A group of 48 designers, including Donna Karan, Alexis Bittar, Cynthia Rowley, and Nicole Miller, have created one-of-a-kind helmets.

With a minimum bid of $248 (to celebrate the 48th Super Bowl taking place across two states) fans can buy the helmets, with 100% of proceeds going to the NFL Foundation. The helmets are already on view in Bloomie’s 59th Street windows.

Within stores, Bloomie’s is selling game-related gear in pop-up shops, featuring apparel from labels like Junk Food, Smart Turnout and Freshman Cap, as well as gam-branded kitchen and glassware products.

Organizers estimate the game will bring 400,000 visitors and $600 million in revenue to the New York and New Jersey region, somewhat less of a payday than many expected. As a point of comparison, reports Women’s Wear Daily, the combined impact of the February and September 2012 New York Fashion week was $865 million. And in 2013, 54.3 million people visited New York City.

One of the biggest splashes in New York comes courtesy of Detroit, with its Super Bowl Boulevard Engineered by GMC, an interactive football-themed experience running on Broadway, between 34th and 47th streets. It even includes a toboggan run, to commemorate that this is the first cold-weather outdoor Super Bowl.

All that puts Macy’s Herald Square flagship squarely in the spotlight: The retailer plans to broadcast NFL film footage on its facade, and have football-themed windows. Inside, fans can shop at the Super Bowl Shop, taking up an impressive 36,000 square feet, where they can get autographs from NFL players, and see auctions of football memorabilia. (It’s said to be the largest retail space in the NFL’s history.)

Game offerings at Saks Fifth Avenue are decidedly more highbrow, including a World of Versace shop with special merchandise, team-color nail polishes, luxury takes on tailgating food at its restaurants, and a Mizzen+Main shop, with men’s athletic clothing. It’s also working with the Off the Field Players’ Wives Association in events that will raise money for women’s shelters in New York City.