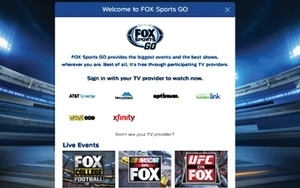 This year, even those sorry souls deprived of a big screen on Super Bowl Sunday can enjoy the spectacle.

Fox Sports’ app, Fox Sports GO, will be streaming the gridiron battle free of charge on Sunday, Feb. 2 -- but only to desktops and iPads.

IPhone users will be left out in the cold, due to the NFL’s exclusive mobile contract with Verizon, said Clark Pierce, senior vice president, mobile and advanced platforms for Fox Sports. “It is what it is,” Pierce said regarding the limited streaming rights. “We have the rights we have.”

Fans who want to watch the Denver Broncos battle the Seattle Seahawks on a smartphone will need to shell out for NFL Mobile from Verizon.

As of Wednesday, Fox was not able to release the names of advertisers onboard for Super Bowl XLVIII, but a company spokesman said there is about 30% crossover between the TV and digital channels.

The free stream is part of a larger effort to promote the Fox Sports GO service, which is usually only accessible to pay-TV subscribers.

The special preview will allow users to access content on Fox Sports GO from Sunday, Feb. 2, at midnight, until 3 a.m. Monday, Feb. 3. Along with the game, additional programming will include the Fox Super Bowl Sunday Pregame Show, as well as content from Fox Sports 1 and Fox Sports 2.