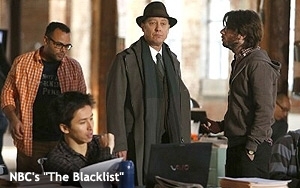 It seems there is no stopping NBC’s “The Blacklist.” It is to television audiences in the early years of this dade what CBS’ “CSI: Crime Scene Investigation” was to viewers at the beginning of the 2000s: A well produced exercise in extreme violence and depravity that raises the broadcast bar for such content within the confines of a high-quality scripted dramatic series. It happily provides the dark adult storytelling that millions of Americans crave, all the while serving up gripping, edge-of-one’s-seat entertainment and, for those who care, complex psychological mysteries that further challenge the audience.

This past Monday, “The Blacklist” was viewed by 10.2 million people during its 10 p.m. telecast. It grew by 9 percent week-to-week among adults 18-49 and by 15 percent among total viewers. That’s a significant accomplishment for this freshman series, especially at a time when it does not enjoy a massive lead-in from “The Voice,” as it did throughout the fall.

Meanwhile, the January 20 episode set a new record for the biggest live+three-day increase ever on broadcast or cable, adding 5.430 million viewers to its live-plus-same-day total. According to NBC, “The Blacklist” has now delivered the seven largest live-plus-same-day to live+3-day total-viewer increases in the history of such measurements.

The outsize success of this show, which was not entirely unexpected, reminds me of the instant success back in October 2000 of “CSI,” which nobody saw coming. “CSI” gets extra props, however, because CBS had dumped it on Friday night, where it was expected to either muddle along or die. Viewers flocked to it there; CBS responded by swiftly moving it to a more visible and lucrative time period on Thursday.

“CSI” brought into our living rooms graphic imagery and twisted scenarios that I don’t believe we had seen before, at least on a broadcast television series (nor, at the time, on a basic cable show). These included vivid depictions of cannibalism, sadism, bondage, various fetishes and extreme close-ups of the internal and external damage done to human bodies via gunfire, stabbing and other assaults. Viewers loved it! I recall in its early years that “CSI” flashed a naked body or two, including bare behinds, but that was before Justin Timberlake exposed one of Janet Jackson’s nipples during the half-time show at Super Bowl XXXVIII -- ten years ago! -- and the broadcasters were smacked back into their caves by the FCC.

Since that time, even fleeting nudity on broadcast has remained largely verboten. But violence, blood, guts and gore are back by the bucket load, and in the case of a show like “The Blacklist,” they are often presented not during crimes that are inspired by real-life events (as is often true of NBC’s sometimes visceral “Law & Order: Special Victims Unit”) but in scenarios of extreme horror that owe a debt to the popularity of such R-rated movies as “Saw” and “Hostel.”

Anyway, I binged the other night on several recent episodes of “The Blacklist” that had built up on my DVR while I was attending the Winter Television Critics Association tour, and as I was watching I realized how nice it had been to have a break from the unrelenting madness and mayhem that characterize the show. I was also pulled into it all over again, largely because I can’t help but enjoy everything that James Spader does (and he’s a kick here as the mysteriously helpful arch-criminal Raymond “Red” Reddington) but also because the supporting cast continues to improve and impress. And then there are the stories -- each of them a thrill ride quite unlike the many other violent crime shows on television. They are totally convincing and absorbing and terrifying, and if nothing else they get my mind off whatever might be bothering me before I watch.

But my “Blacklist” binge did start to wear me down. The cumulative awfulness of so much of the terrible acts committed against so many innocent people got to me. I actually skipped an episode that began with a suburban mother being kidnapped and strapped to a table in a lab of some kind, helplessly pleading as the psycho of the week approached with menacing medical tools. I don’t know what he did to her, or why he did it. I only knew that I wasn’t in the mood to watch whatever it was, perhaps because it felt too much like a nightmare scenario I had seen dozens of times before. I guess “The Blacklist” is continuing to test my limits. Fortunately, I still have a few.