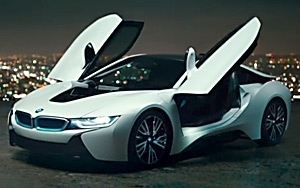 Both Acura and BMW are launching campaigns during the Winter Olympics. The former is, for the first time, putting Acura TLX Prototype sports sedan, the RLX Sport Hybrid SH-AWD and the NSX Concept supercar together in a campaign. BMW is using the Winter Olympics to launch its campaign for the new BMW i electric cars.

The latter, serving as Official Mobility Partner of the United States Olympic Committee (USOC), says it is making its largest media investment of the year around BMWi. The Olympics effort comprises three TV spots via Kirshenbaum Bond Senecal + Partners. The ads, the first for BMW i, comprise a brand spot featuring the recorded voice of none other than Arthur C. Clarke; an ad for the new BMW i3; and one for the high-end BMW i8.

Having broken Feb. 7 during NBC's broadcast of the opening ceremonies, the BMW i effort touts the cars as a futurist dream. In the brand spot, Clarke (author of The Sentinel and the  movie upon which it is based, "2001: A Space Odyssey"), talks about the future in glowing terms. As he speaks, we see shots of a futuristic city through which a BMW i car drives. The spot for the BMW i8 extends the sci-fi idea by equating sightings of the BMW i with those of an alien spaceship, complete with glowing eyes, and zooming and humming noises.

There is also a raft of online videos during the duration of the Games at NBCOlympics.com. The digital shorts are humorous vignettes that tout the idea that BMW’s electrics don’t sacrifice thrill, and fun, to more rational concerns like efficiency (one guy doesn't mind getting pulled over by a cop.) During the Games, the automaker will also tout the X5 SUV and the new BMW 2 Series.

The automaker has already touted its relationship with the Games with thematic ads -- and per the company, consumer and retail activations, social and digital media executions and a national drive campaign to benefit Team USA. Social activations include “BMW Bobsled Time Tracker" where viewers can predict the finish time of the U.S. two-man Bobsled’s first runs on Feb 16. One winner and their guest will get the Ultimate Bobsled Experience in Park City, Utah.

While Acura is not a sponsor of the Games per se, the luxury sibling of Honda is buying media in 14 U.S. markets against major Olympic events. Also with a futurist bent, its ad shows a stadium full of people there to watch a horse race. The horses are robots, however. One guy runs up to the bottom row of seats and seems to know something unusual will happen. The four robotic horses take off, banging into one another for position. But then a real horse, the "dark horse," catches up from far behind and edges into the lead. Suddenly it becomes the 2014 Acura RLX Sport Hybrid. It is joined by the 2015 TLX Prototype and the NSX Concept."Let the Race Begin" is the tag.

Acura said the spot, via new AOR Mullen, was set to debut on Feb. 8, and timed to run during NBC prime-time programming, and on major events in February. Acura says it will also air the ad as part of its sponsorship of the NCAA "March Madness" basketball tournament, and in April on cable. The automaker is also doing digital and social media activations, it says, including on Acura.com.