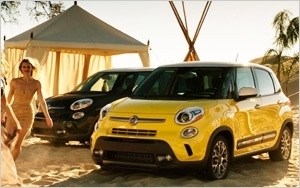 Said CMO Olivier Francois, the brains behind the automaker's use of other celebrities for Fiat, Chrysler and Dodge divisions -- Will Ferrell's Ron Burgundy character; Bob Dylan; Eminem; Clint Eastwood; Pitbull for Fiat and Dodge; Charlie Sheen; and even Iggy Pop, among them -- Fiat's image makes the rapper/mogul a good fit. “Given the huge role that both pop culture and music play for the Fiat brand, the opportunity to work with Sean ‘Diddy’ Combs on ‘Mirage’ made as much sense as taking water into the desert.”

Speaking of the desert, the campaign, via Doner, takes place in the sandy wastes of what is presumably the Sahara. It is cross-promotional as it also touts Combs’ new Revolt music channel: two guys wander around in the sandy wastes until they spot two Fiat 500Ls rolling by. “Diddy” is driving one. They think he's a mirage. They wind up in an oasis where a party for Revolt is happening. Diddy is there to welcome them. The whole idea is that they think it's a mirage because Fiat couldn't possibly make a four-door.

Revolt will help out by streaming a behind-the-scenes making-of video through the channel's Instagram account after Thursday's premier. The videos are also going to be on Revolt's YouTube channel.

Another huge music and culture mogul/rapper Pharrell Williams gets some cross-promo action on the film as well. The background music at the mirage-like party is his Academy Award-nominated song "Happy" from “Despicable Me 2.”

Chrysler Group tends to eschew the usual athlete-du-jour approach, which has probably gotten a bit tired, going instead for huge, if sometimes aging, icons and stars, particularly those who either have never done an ad, or if they have aren’t strongly associated with any other brands. While Bob Dylan appeared in this year’s Chrysler Super Bowl ad for the redesigned 200 sedan, sibling brand Jeep last year did use a Dylan tune, “Motherless Children” to tout the return of the Cherokee.