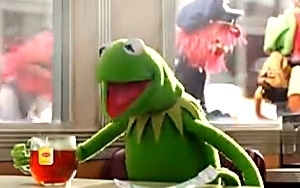 If there were such an award, Lipton Tea would have taken home the Oscar for best advertising during last week’s Academy Awards.

The beverage company’s ads with the Muppets made them the advertiser with the biggest perception gains with women, according to YouGov BrandIndex, the only daily brand consumer perception research service.

Known as the “Super Bowl for Women,” last Sunday’s Academy Awards drew a 10-year record 43 million viewers as not only movies battled it out, but advertisers for the attention of women viewers.

Lipton’s “Be More Tea” campaign premiered on the Oscar telecast, driving its perception and word of mouth with women ahead of all other advertisers that night. Lipton was also the second-most-effective brand ad driving YouGov BrandIndex’s Purchase Consideration metric, which ties directly into potential sales, just behind Chevrolet.

"If this year's winner proves anything, it's never underestimate the drawing power of the Muppets, especially when they have a movie to aggressively plug,” YouGov BrandIndex CEO Ted Marzilli tells Marketing Daily. “Lipton has been around a long time, but riding on the universally loved Muppets bandwagon, which requires a touch of content subversiveness, can have a big payoff.”

Dove’s “Open Letter to Armpits” gave it the second-biggest perception female gains for the night, followed by Chobani and its spot for Simply 100, a new low-calorie Greek-style yogurt. Chobani has been on a roll after making the biggest overall perception gains across both genders at the recent Sochi Olympics.

“You also have to hand it to Chobani, the big marketing surprise of first quarter 2014 -- coming off the biggest perception gains at the Sochi Olympics and now rolling into the Oscars with another memorable execution,” Marzilli says. “This is an upstart food company which has made a favorable impression very quickly.”

Cadillac, under some critical fire for its ELR ad in its portrayal of rich people, actually did well in YouGov BrandIndex’s measurements, garnering the fourth-highest gain in perception among women.

Retailer J.C. Penney ran the most ads during the broadcast – six – and gave out its own “Oscars” via its Vine account during the telecast. However, the brand’s perception gains were too mild to be significant.

Academy Awards advertisers were measured with three of YouGov BrandIndex’s scores: Buzz ("If you've heard anything about the brand in the last two weeks, through advertising, news or word of mouth, was it positive or negative?"), Purchase Consideration ("When you are in the market next to purchase, from which of the following brands would you consider purchasing?”) and Word Of Mouth ("Which of the following brands have you talked about with friends and family in the past two weeks -- whether in person, online or through social media?").