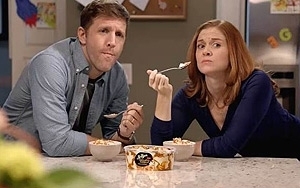 As part of its launch campaign for Breyers Gelato Indulgences, Breyers will air 30-second sponsored-content "vignettes" before commercial breaks on episodes of NBC's "Parenthood."

The vignettes' format and creative essentially enable integrating brand and programming content -- but without a product placement or script integration within the show itself.

The short videos feature actors playing a young adult couple sitting on their couch, watching the evening's in-progress episode of "Parenthood." As they chat about what's just happened on the show (also making occasional references to their kids, who are upstairs in bed), they share spoonfuls of the Breyers gelato right out a tub and remark about how delicious it is.

The first episode-specific Breyers gelato vignette will be aired during tonight's "Parenthood," (10 pm EST); the show's April 10 and 17 episodes will also each include such a vignette. (These aren't currently viewable online, as they're being kept under wraps until they debut on-air.)

Six other vignettes using the same couple, setting and premise -- but with dialogue that has them talking about non-episode-specific "fun facts" about "Parenthood" (like the fact that several of the series' cast members have worked together in the past) -- were also created.

Three of these will be included in video-on-demand versions of the show's episodes on NBC.com. Three others will be featured on the "Parenthood Inside Scoop" area of NBC's site. Starting April 4, the top of that page will feature a click-through image that will take fans to the first "fun facts" vignette; the other videos will be posted there after the April 10 and 17 episodes.

During the network broadcasts of the three "Parenthood" episodes, each of the vignettes will be followed by a new, 30-second TV spot for Breyers Gelato Indulgences (and a bank of ads for other products).

The TV spot, from DDB NY, features another pair of actors playing a husband and wife. This time, they're interrupted by their little boy as they "sneak" spoonfuls of the gelato during a late-evening moment of indulgence in their kitchen. They guiltily assure the boy that the treat is not ice cream, and that he wouldn't like it, because "it's not for kids." (The spot is already viewable as a preroll on an NBC.com preview trailer for tonight's "Parenthood" episode -- a still from the spot is shown above.)

Breyers Gelato Indulgences will also sponsor extended video previews of the show's April 10 and 17 episodes on NBC's site (the brand's TV spot will be used as a preroll).

Breyers and NBC have for several weeks now been using their social media assets to cross-promote and tease fans about the new "Parenthood" episodes.

The gelato line's launch campaign will also include airing the TV spot (in 15- as well as 30-second versions) across a broad spectrum of national network and cable prime-time and daytime programming, and banner and rich-media digital ads on numerous magazine-branded, news and lifestyle Web sites.

All of the vignettes' creative was produced by NBC. Mindshare is managing the Breyers/NBC campaign partnership.

Differentiating a Launch Amid Fierce Competition

The customer and prospect bases for Breyers ice cream span a wide range of age and other demographics, but its core customers are moms with young families. The gelato line was developed in response to these consumers' expressed desire for "even more indulgent offerings" from the brand -- treats that they can share with their spouses after the workday is over and the kids are in bed, while viewing favorite, "appointment" TV shows, says Soukas.

Given that the overall ice cream/frozen desserts category is experiencing declining sales, and that a proliferating number of national and private-label brands are offering gelatos and novelty items, as well as regular ice cream and reduced-fat/calorie options, what's Breyers's differentiating value proposition for its gelato line?

Breyers spent years developing products for U.S. consumers that are exceptionally authentic to the "Italian gelato experience," according to Soukas. In addition to featuring "creamy" gelato flavors, each variety includes a complementary sauce and crunchy toppings -- and the "artfully crafted" products are showcased in clear plastic tubs, he explains.

The Breyers gelato products are being sold in grocery stores nationwide in four varieties, in 28.5-ounce packages with suggested retail prices of $4.49 to $5.99.