AT&T Powers Tribeca Film Fest With 'Film For All' Campaign 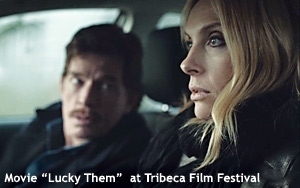 New York's Tribeca Film Festival is known for its celebrities, award-winning movies and exclusivity. After all, festival founder Robert De Niro doesn't just hang out with anyone.

Now, this year's new title sponsor AT&T and creative agency Partners + Napier New York want to add a little people-power this year to the festival's red-rope reputation. This fully integrated Film for All campaign aims to connect more people to the power of film and honor its iconic New York roots, as well as leverage AT&T's mobile, retail and service platforms.

To drive consumer participation in the Twitter-based #FilmForAll engagement, Partners + Napier New York created 15- and 30-second trailers narrated by Whoopi Goldberg. She poses a question that anchors the entire promotion: “What’s the one film every New Yorker should see?”

A variety of notable personalities offer their favorites, including Katie Couric recommending “To Kill A Mockingbird” Andy Cohen supporting “All About Eve” and Donald Trump suggesting “Citizen Kane.”

In addition, a celebrity-centric trailer will be shown before all TFF screenings, as well as in NYC taxis and elevators to encourage users to tweet their own film favorites to #FilmForAll. Then, the most tweeted film will be screened for free in all five boroughs this summer.

These suggestions will also be displayed via a massive, real-time projection on the AT&T Terminal Building in Tribeca, created in partnership with Partners + Napier’s sister agency Spinifex Group. A man-on-the-street version of the trailer featuring real New Yorkers will be shown as digital pre-roll ads and on the campaign microsite.

“AT&T was looking for a way to invite all of New York to experience film," Andrea Spiegel, managing director, Partners + Napier New York. "We came up with a platform around Film For All and surrounded it with opportunities for New Yorkers to engage with the AT&T brand in an organic extension of its sponsorship of the Tribeca Film Festival.”

AT&T's sponsorship also introduces the "Film For All Friday" promotion that offers free film screenings for individuals on Friday, April 25. Tickets to these screenings are available via email through AT&T or at AT&T company-owned retail locations in all five boroughs, two locations in New Jersey, Hoboken and Edgewater, as well as at TFF box office locations.