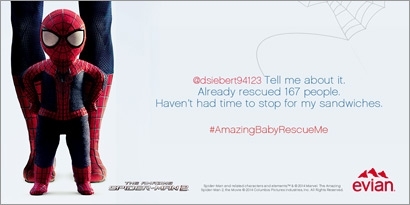 Evian's latest baby-themed video, featuring Spider-Man meeting his "baby me," has pulled nearly 14.7 million views on YouTube since it went live on April 1.

But Evian (and the creative agency behind the videos, BETC Paris) has a lot to live up to on the viral front: The original "Baby & Me" has pulled 83,000 views on YouTube alone since its release a year ago, with total views in the six figures.

So Evian isn't taking any chances. In addition to having released a teaser video prior to debuting the full-length "Baby & Me 2" Spidey creative, the water brand is running a post-release social campaign, through agency We Are Social, that's designed to leverage the interest around the new movie that it ties into, "The Amazing Spider-Man 2."

Followers of Evian's global Twitter account are being urged to share their every-day dilemmas, using #AmazingBabyRescueMe, for a chance to receive "personal advice" from Spidey's baby-me ("Amazing Baby").

Evian's responses consist of tweets, Vines and illustrations featuring the Amazing Baby character and his solutions, which encourage fans to "let their inner super-babies out to play" (in line with the brand's overall "Live Young" campaign theme).

The brand and social agency are also engaging in social listening, to surprise users who share that they're having a bad day with personalized responses from Amazing Baby; and regularly updating content on an Amazing Baby Pinterest board.

In addition, the brand is posting a series of dilemmas on Facebook in multiple local markets, asking fans to stand in for Amazing Baby and come up with  solutions for those in need.

Some Facebook suggestions from each market that are deemed most creative will be rewarded with prizes (like tickets to the new Spider-Man movie and limited-edition Evian Spider-Man collector bottles). The winners will be announced through personalized, comic book-style Facebook posts illustrating the suggestions.