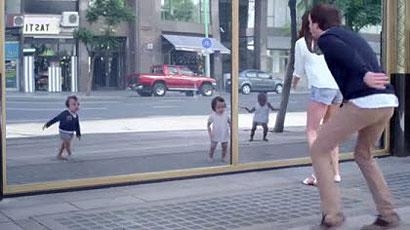 "Roller Babies," released in early July 2009, was viewed nearly 25.7 million times through online video sites within its first six weeks (through Aug. 19), reported Guinness. Two years later, its views were up to 65.5 million. Currently, YouTube views for the video's international version are at nearly 72.4 million, and views for the U.S. version are nearly 19 million, for a combined 91.4 million.

"Baby&Me," a 1:16-minute reprise produced by creative agency BETC, features people of all descriptions and ages dancing with baby versions of themselves, viewed in reflection on what appears to be a large store-front window on a busy city street.

"Baby&Me" has been viewed more than 135 million times across 80 countries since it was released in mid April of this year, including about 75 million U.S.-based views, according to Evian. One-third of overall views were via mobile devices.

Moreover, it's estimated that close to 90% of the views to date were generated through shares of the video across various social channels and networks, reports Alexis Thobellem, social media & connect objects manager at Evian's parent company, Danone Group Global.

While multiple channels were used for the campaign, the two largest, global ones were YouTube – currently showing nearly 68 million views -- and video ad platform Ebuzzing.

While overall views are of course important, in launching the “Baby&Me” campaign, Evian made number of shares across social channels its primary success metric.

One challenge was the limited options available that offered both large scale and ready "shareability" of video ads, says Thobellem. (For instance, YouTube’s TruView format for preroll ads delivers huge scale, but no means for audiences to share the preroll ads.) Ebuzzing – which (in its own description) delivers shareable, proprietary ad formats across 20,000 premium online publishers and via social media channels, and crawls over 2 million Web pages per day to target the most engaged audiences -- provided that solution, according to Thobellem.

Evian's contract with Ebuzzing called for continuing the campaign on the platform until the video ad had been viewed 3 million times. That 3 million benchmark was reached in under 30 days (between April 28 and May 21 this year), with the video ad being viewed by 87% of the people to which it was served through the platform during that time, reports Ebuzzing. All of those views were opt-in: Viewers chose to click into and view the ad through completion.

Nearly 7% of those views were then shared, resulting in 212,575 shares across various social media channels. Those shares in turn resulted in more than 4 million opportunities to see the ad on various social news feeds. In short, the share metrics for the platform far exceeded Evian's expectations, the brand confirms.

Social engagement and sharing does not, of course, necessarily translate to sales. Indeed, Forbes reported that according to a book examining social media viral dynamics by Wharton School assistant professor Jonah Berger, in "Roller Babies"'s first year, when it drew some 50 million views, Evian lost market share and its sales declined 25%.

But indicators to date point to demonstrable sales-driving results for the “Baby&Me” campaign. During the campaign's run, Evian's business results outpaced those of the global water market, which was down 3%, according to the company. (The campaign is no longer running as preroll on YouTube or as ad formats across the Ebuzzing publisher network, but it is viewable and shareable on the EvianBabies channel.)

In addition, in May, Evian released a Baby&Me app for iOS, Android and Facebook with facial recognition capabilities. Users can snap selfies or photos of friends that when uploaded are instantly "babified" (the subject's "baby me" is revealed) and can then be shared on social networks, including Facebook and Twitter (using hashtag #EVIANBABYANDME).

In launching the campaign, Jerome Goure, VP of marketing for Danone, said that the babies embody Evian's "Live Young" mantra, and "remind us that we are all youthful in our own, unique way...Babies are also the ultimate symbol of natural purity, exactly what Evian water is."