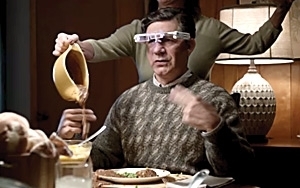 FirstBank takes a light approach in a new TV spot that pokes fun at a family that is attempting to eat dinner, but find their Google Glass eyewear is getting in the way.

“We want to educate early adopters that not all banking apps are the same,” Jensen tells Marketing Daily. “Our app has a lot of robust features but it also has a clear, simple interface that is very user-friendly. We have already received a lot of positive comments from customers about the new spot.”

The early adopters featured in the spot are enthralled by the latest in digital technology. They are shown surfing through supper, via optical head-mounted display. Boundaries between the virtual world and that of meatloaf, peas and gravy, however, are problematic.

Seconds before the end, an on-screen super says “Get back to the real world,” and the voiceover states: “The FirstBank Mobile App. Technology has never been so easy.”

The 30-second spot will air on prime, live sports and news programming on all broadcast networks, plus 20 top cable channels, from ESPN to History Channel to USANetwork through the end of this year. It will also go out on mobile device networks via Specific Media (Facebook), Rocket Fuel and Quantcast.

FirstBank’s mobile banking is convenient for anyone with a smartphone, he adds. Customers can make transfers, pay bills, deposit a check, or view balances with the new FirstGlance feature.

“We plan to continue to expand our messaging to a broader group to showcase these benefits,” Jensen says.