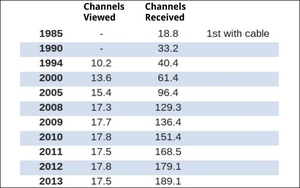 At a time when a rapidly expanding “TV universe” is poised to explode into an even more expansive “video universe,” Nielsen is releasing new data showing the attention spans of American viewers have essentially maxed out. The data, part of an annual benchmark report published by Nielsen, shows the number of channels viewed by the average households has stabilized at around 17.5 since 2008, even though the number of channels available to them has grown by 60 since then.

The data is significant for several reasons, including the fact that Nielsen later this year will begin producing ratings for sources of video programming distributed outside the TV universe -- specifically, the Internet and mobile Web. Nielsen executives are still trying to figure out how they define the concept of “channels” in what could potentially be an infinite and ever-expanding universe, and have organized a client committee to help decide that, but one thing is clear: in the next year, or sometime shortly after it, the number of options in the universe Nielsen measures will be greatly bigger than what it measures today.

What gets included or excluded in that universe could have a big impact on the success of video programming business models, which for the most part still rely on advertising. And while Nielsen ratings do not necessarily serve as advertising currency, the lack of Nielsen ratings has significantly curtailed the growth of TV networks that haven't been able to get them. Currently, so-called “long-tail” networks -- channels distributed on digital TV tiers that are too small to qualify for Nielsen's panel-based ratings -- represent as much as 20% of national viewing, but are not able to report a rating.

The same scenario is likely to occur when Nielsen begins reporting its so-called Digital Program Ratings later this year: a few really big sources of video consumption are likely to dominate. The No. 1 source, ironically, is essentially an aggregator of online video's long-tail: Google's YouTube.

Nielsen currently does not have an official number for YouTube's share of viewing, but a MediaDailyNews analysis of data from several knowledgeable industry sources estimates YouTube represents between 1.5% and 2.0% of the combined TV/video universe.

“And that’s nothing to sneeze at,” says one long-time TV industry research executive, adding that while it might seem small in comparison to traditional TV viewing shares, it is quite significant in the context of the new combined universe.

“Two percent of TV/video ad revenue is a decent piece of change,” he said, adding, “if they can get it.”

Not coincidentally, YouTube has been moving in a direction to do exactly that, recreating its sales and marketing approach to Madison Avenue to replicate the TV industry's historical models, including an upfront, with guaranteed audience ratings (both Nielsen's Online Campaign Ratings, and comScore’s vCE ratings, depending on which clients want to use), allocating premium channel inventory, and potentially even negotiating cancellation options, and other network TV sales conventions.

The other biggest source of online video programming -- subscription streaming service Netflix -- currently does not utilize an advertising model -- but that could change. Netflix recently announced plans to actually launch a conventional TV channel on cable TV.

Meanwhile, the new data on TV channels received vs. viewed comes as some comfort for the most dominant programming channels, but it also signals a challenge for up-and-comers, because even if they do qualify for Nielsen ratings, the likelihood they can compete for viewer attention is growing increasingly small, due to hyper-fragmentation.

Since 1994, the year Nielsen began reporting the average number of channels viewed, the percentage viewed declined from 25.2% to 9.3% in 2013.

Since 2008, the year when the average number of channels viewed stabilized around 17.5, the percentage viewed declined by more than a quarter -- from 12.4% to 9.9%.