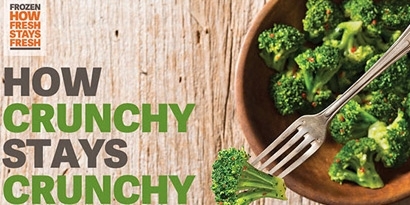 Leading frozen food makers, under the auspices of the American Frozen Food Institute (AFFI), have launched a three-year, $30 million-per-year campaign aimed at changing consumer perceptions to revive the category's growth.

The core message of the campaign, "Frozen. How Fresh Stays Fresh," is that "freezing is simply nature's pause button that keeps fresh foods at their peak of freshness," summed up AFFI president and CEO Kraig R. Naasz.

The campaign is a response to the category's declining sales in recent years, as Americans have increasingly shifted to buying fresh foods, which are not only perceived as more nutritious, but healthier because they don't contain preservatives and other artificial ingredients, or high levels of sodium.

McCann is the lead creative agency on the campaign, which spans national television, digital and print advertising, online engagement and promotions in and outside of stores. The initiative is the frozen food industry's biggest to date, and the first to employ television.

The first 30-second TV spot -- viewable on the campaign's site -- points out that studies show that fruits and vegetables are kept at their peak by freezing, and that freezing also keeps "the just-crafted, just-baked meals" in the freezer aisle at their peak. It urges consumers to "take a fresh look" at frozen foods.

Howfreshstaysfresh.com also offers information about the freezing process; news about frozen foods, such as studies showing their nutritional value; and takes on frozen food myths (such as that frozen meals aren't as nutritious as fresh, don't use real ingredients, or cost more than restaurant takeout meals). One point made is that "many of your favorite frozen foods, like lasagna, contain no added preservatives."

As part of the campaign, registered dietitian and author Keri Glassman has been hired to promote frozen foods' benefits in media and public appearances.

Also, food makers are working behind the scenes to communicate those benefits to dietitians, including the growing number now employed by supermarkets, hoping the dietitians will pass the information along to consumers, FoodManufacturing.com reported last month. Two programs that include outreach to dietitians are Nestle USA's "Balance Your Plate on a Budget" meal plan featuring products such as Hot Pockets and Tombstone pizza for people on fixed incomes; and ConAgra's PR campaign for the "simplified" ingredients now in its Healthy Choice meals.

In addition, some campaign participants are running their own brand-specific campaigns. Nestle's Stouffer's, for instance, is running a "Made for You to Love" campaign showing families enjoying the brand's frozen meals at dinner.