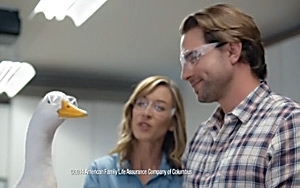 The Aflac duck is joining forces with HGTV celebrity Scott McGillivray in a campaign that debuted earlier this week.

A 30-second spot, “The Duck Project,” is an extension of the “Fore! Days” commercial, which highlighted how the Aflac duck lacks golf skills, but is great at paying claims fast.

Creative shows the Aflac duck taking on a new hobby and trying to fulfill the role of a do-it-yourself handyman. The spot shows how the duck might not be great at home repair, but his insurance company pays benefits quickly so policyholders can focus on recovering from injury or illness without worrying about their finances.

The spot debuted May19 during “The Voice” season finale part one. To accompany the spot, Aflac is launching a fully integrated marketing campaign, including digital banner ads, public relations outreach and social activations on the Aflac duck’s Facebook, Twitter, Instagram and YouTube pages.

During the campaign, the Aflac duck will select three social media fans to receive a visit from a home improvement expert to help knock a quick project off his or her DIY home improvement list. Additionally, fans will watch as craftsmen create small, toy woodcrafts to help illustrate daily out-of-pocket expenses as well as larger-than-life chainsaw carvings of the famous Aflac duck.

For the first time, Aflac’s primary philanthropic cause, childhood cancer, will be a part of the integrated television campaign. The woodworking social media initiative will culminate with the woodcrafts being auctioned to Aflac’s independent sales agents with proceeds going to the Aflac Cancer and Blood Disorders Center of Children's Healthcare of Atlanta.

McGillivray, a licensed contractor and the host and executive producer of HGTV’s “Income Property,” is less than impressed with the Aflac duck’s home improvement skills when he hands him a plunger instead of a wrench, can’t start a chainsaw and haphazardly aims a pneumatic nailer throughout the garage.

But when McGillivray finds out how quickly Aflac paid his friend’s claim for a broken arm – in only four days, he realizes the Aflac Duck might be more helpful than he thought. McGillivray decides he can take a lesson from the Aflac duck about the benefits of voluntary insurance and getting claims paid fast, but offers his expertise in return by giving the Aflac duck a pair of safety glasses for his next home improvement endeavor.