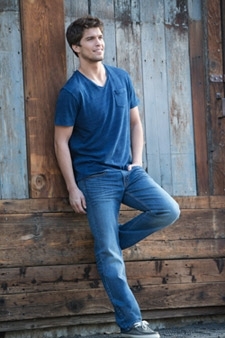 Wrangler is introducing Red, a new line of denim just for Gen Y guys, hoping to cash in on Millennial style, frugal chic, and the upsurge in men’s clothing.

And unlike Wrangler jeans, pitched by such fogey-favorites as Brett Favre and Dale Earnhardt Jr. and touted for their, ahem, roomier fit, Red is geared for style, as well as its low price. “We sell a lot of jeans in mass channels to men who are 35-plus, and men who are 25-plus,” Craig Errington, Wrangler’s VP/marketing, tells Marketing Daily. “But we see a real niche for Millennial men. We know that one out of five is already buying jeans in mass channels. He’s very brand-conscious, and our brand does resonate with him. We just haven’t had a relevant product before, and now we do.”

Pants are sold in four fits -- Vintage Skinny, Vintage Slim, Vintage Straight and Vintage Boot, as well as a variety of washes. Even the shirts are skinnier. All items in the line include the brand’s signature -- a red woven label and hints of red stitching throughout.

Making the product appealing “is all about the details,” Errington says, including modern fits and color washes in deeper, darker indigos.” And the $20 price tag is key. “Some feel this group desires luxury and will pay to achieve the designer label that goes along with it. However, in talking to the consumers, we’ve found there’s an opportunity to introduce a new label for the fashion-conscious young Millennial male who wants to look good. But these are men who are not willing, or maybe even able, to pay $70 for a pair of jeans and $50 for a shirt.”

And rather than use TV, a marketing mainstay for its flagship brand, Errington says the line will be marketed with a campaign that’s 100% digital. “We need to communicate with them where they are, and that's online and on social media,” he says. In addition to using Facebook, Instagram and Twitter, “we’ll also be using tools to leverage word-of-mouth, and allowing key influencers to spread the word themselves.”

Errington says that to continue its growth, “the Wrangler brand needs to keep winning and building loyalty with our core 40- to-60-year-old consumers; gain more share with 30- to-50-year-olds, and begin building greater relevance and engagement with 18- to-35-year-olds.” Adding younger customers is essential “to keep the brand as strong and relevant for the next 67 years as it has been for its first 67.”

The clothing will be available this summer at Walmart, Walmart.com, and Wrangler.com.