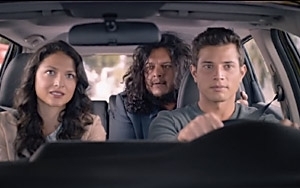 Small cars are big when it comes to Millennial Hispanic consumers. Thus, Honda has launched its 2015 Fit subcompact with a bilingual campaign via its longtime Hispanic agency Orcí. It is a humorous effort that has the comedian bantering with owners of the Fit who tolerate him while he points out features that make the car much more versatile than a compact should be.

The campaign #UnBuenFit (A Good Fit) involves several TV spots starring the up-and-coming wild man comedian Felipe Esparza, plus digital, experiential, and social media components. The campaign, meant to reach 18- to-34-year-old Latinos, follows the larger strategy of focusing on product versatility, and how its “Un Buen Fit” for their lives.

Esparza won NBC’s “Last Coming Standing” in 2010, and star of his own stand-up special “They’re Not Gonna Laugh at You,”a Showtime exclusive special (also on Netflix.)

Andrew Orcí, the Los Angeles-based agency’s CEO, tells Marketing Daily that Esparza is a good fit for Fit. "He exemplifies the target in that he's bilingual Mexican American from Los Angeles, and he is up and coming. He has lots of fans on his social channels and is pushing the message to them." Orcí adds that Esparza also has a following among non-Hispanics. "He has a lot of fans who didn't know he speaks Spanish."

Honda is, in fact, running the ads on both Spanish media and English/general market channels. The ads aired on NBC last week as well as on all of Honda's digital and social channels (Instagram, Tumblr, Twitter and the like.) "It's really the first time we have done a fully integrated bilingual campaign for Honda," says Orcí.

The effort comprises 30-second spots with English and Spanish versions; one 30-second ad in English; two dealer spots in English and Spanish where dealers can customize offers; and 15-second versions optimized for social media. There is also internet banner advertising and a broader social media component with bilingual content and consumer participation elements. The latter portion is being managed by Orcí on Honda's Latino social media platforms (Twitter:@HondaLatino #UnBuenFit). The consumer content part lets Honda drivers show off their vision of #UnBuenFit. There will be a promotional effort later in the year.

Orcí notes that although the 2015 Fit is the second generation of the car, it is the first Fit for which the agency has developed work. "So it is launching to the Hispanic market with very little awareness,” he says. “That's one reason we went with [Esparza, who has a big, young-skewing social following]. It's perfect for reaching those whom we're focusing on: on urban millennial looking for versatility and price point."

He points out that integrating creative into a total market approach also makes sense because 50% of media consumption by millennial Latinos is via English channels. "It's important to be in both places." He also points out that nine out of ten top urban market regions are minority-majority. "Honda recognizes this and wants to go after it in a targeted way."