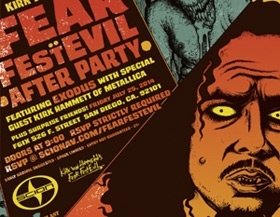 Hammett is known for having a truly huge collection of horror films and horror memorabilia (he will be at Comic Con to sign his first book, "Too Much Horror" about his collection), and the evening, on July 25 at F6IX, is named after his Fear FestEvil, a conclave of music and horror. At the Scion event, attendees get to see Hammett playing with San Francisco band Exodus.

Jeri Yoshizu, manager of sales promotions at Scion, tells Marketing Daily that Scion AV, which supports about 100 underground musical artists, does tours and special events, film documentaries, art installations, and offbeat publications. It also has seven broadband radio stations under its purview via Scion Streaming Radio, and  partners with several music labels. One of them is  Nuclear Blast.

Yoshizu says that at last year's Comic Con, that label was involved in a heavy metal karaoke that Scion did, where a hard rock cover band performed, and a costume contest involved attendees (in costume) would get up and sing while the band played backup. This year, "Nuclear Blast brought in Hammett," she says. "They said, 'Let's do something again,’ and a great opportunity came up this year since he's releasing a book at Comic Con and he was talking to our main contact. Hammett knew us, and does lots of cool stuff for bands."

The F61X venue only has room for 300, and Scion capped invitations at 600. Obviously, the audience size isn't the payoff for Scion; the real play for the Toyota division is social. "That includes how will it be promoted by Metallica, and they have millions of fans on Facebook," says Yoshizu. "So we are looking at it from whether we can get social media shine from that." She says there isn't much downside because it wasn't expensive to activate. And also because it is Scion's ballpark. "We have a huge community around hard rock that we have been nurturing for five years, and we also relationship with new rap music scene so as far as music genres go, what we are seeking out are areas where we can own the space and not attract other corporations."

For Scion, she adds, the focus is less on big events and more on audio tracks and video. "What we have learned is that digital content has legs. So last year we were doing two music events a month; this year only one. We are focused on music releases and partnering with core labels less, not 'majors', and working with artists who haven't yet signed with labels; so we are helping them put out their first record."

Yoshizu says that for the San Diego event the goal is to get fans there to talk about it, partly because it's not a huge uber-branded, come-one-come-all event. "We are rewarding publications that have covered us in the past. I would rather have a fan for whom this is the most exciting thing they will experience and who will blast [the experience] out."