Hyundai First Ever To Top J.D. Power's IQS and APEAL In Same Year 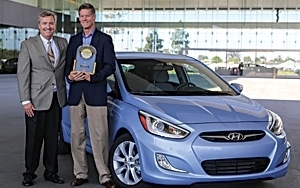 Maybe cars need tricorders and teleporters because consumers just aren't all that impressed with the telematics and entertainment technology upgrades they are getting with the newest models. That is a critical point because automakers focus on these features and their interfaces to move the delight needle versus the competition, and to show how evolved their new model is versus the one it replaced.

According to the latest J.D. Power and Associates' Automotive Performance Execution and Layout study (APEAL), however, that needle isn't moving too much.

The lift in APEAL scores, which are measured across 77 attributes and expressed on a 1,000-point scale, has been driven mostly by fuel economy and the feel and styling of the interior. It's pretty much flat on the bells and whistles.

What has really risen in the study of major auto brands is Hyundai's performance. The firm reports that the automaker, which ranked highest in J.D. Power's 2014 Initial Quality Study, is also number one among non-premium brands in the 2014 APEAL, a double crown no automaker has worn until now. Porsche, for the 10th year in a row, has the highest score among all brands. Dodge and Porsche got three segment awards each, and Audi, Ford, Mercedes-Benz and Nissan won two segment awards each. Dodge won for the Challenger, Charger and Dart; and Porsche for the 911, Boxster and Cayenne.

Audi's A8, in a tie, and Q5 were number one in their sectors; Ford won for the F-150 and F-Series Super Duty pickups; Mercedes-Benz won for the CLS-Class and S-Class (tie); and Nissan for the Rogue and Quest.

The study, based on survey responses gathered between February and May this year from over 86,000 buyers and lessees of 2014 models, finds that the only category where there has been consistent improvement year-over-year has been fuel economy. That, per the firm, is partly due to the decline in gas prices during the study period. But fuel economy also happens to be by far the lowest-scoring category in the study.

The problem with technology improvements is that they tend to be hard to figure out. Said Renee Stephens, VP of U.S. automotive at J.D. Power, in a statement: "Automakers often look to new features and technologies to keep their vehicles fresh and attractive, but designing systems that consumers find intuitive and easy to use has been a challenge.”
automotive, brand marketing, customer experience, customer relations, loyalty, marketing, research
Next story loading