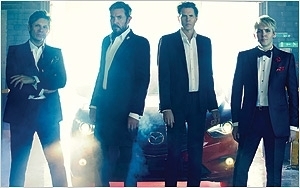 Can Mazda’s Miata Zoom Zoom in Moschino? Sure, the little roadster has been fashionable for a quarter of a century. And the brand has aligned with music acts for as long.

Mazda actually launched the Miata in the 80s, when New Wave was in and fashion band Duran Duran was hip. Now, to celebrate the 25th anniversary of the car while launching the new 2016 model Miata MX-5, the automaker is combining music and fashion as exclusive automotive partner of the Sept. 9 CBS special “Fashion Rocks” during Fashion Week.

The sponsorship, via a partnership with Three Lions Entertainment and Don Mischer Productions gives Mazda a presence during the show, category-exclusive content and real-estate on Fashion Rocks digital properties.

Mazda’s six-week campaign around the event, which will be hosted by Ryan Seacrest and held at Barclays Center in Brooklyn, starts Aug. 1 with a digital campaign called “Road to Fashion Rocks” at www.FashionRocksLive.com/The-Roa. The branded site has curated music content including Mazda-branded videos featuring artists participating in Fashion Rock like Pitbull, J. Lo, Usher, Nico and Vinz and Duran Duran with the new Miata as well as Mazda’s Mazda6, Mazda3 and CX5 models.

The partnership also wraps in the reveal of the 2016 MX-5 Miata roadster on Sept. 3. The car will be shown at a private concert in Monterey, Calif. featuring one of the Fashion Rocks artists. The concert will be live streamed, with #MX5Turns25 and #LongLivetheRoadster as sites for social extension.

Russell Wager, Mazda’s North American VP marketing tells Marketing Daily that during the concert broadcast “The MX-5 will be part of it in some form or fashion; we are working out the details.” He adds that Mazda will also have ad buyers during broadcast.

“The interesting aspect of this is that 25 years ago when we introduced the [Miata] MX-5  one of the hottest bands was Duran Duran. That’s why we picked them back then [to be involved in the launch]. Now Nico and Vinz are the number artists with ‘Am I Wrong.’”

“We have had a relationship with Three Lions Entertainment Group going back many years," Wager says. "They spoke with us early this year when we were in the throes of finalizing how to launch and reveal the next-generation Miata. When they talked about the timing of ‘FashionRocks’ during Fashion Week, and that it’s 25 years after the first Miata launch, it just made perfect sense.”

And, he notes, the partnership lets Mazda exploit Fashion Week without getting sucked into the ‘fashion-nado’ across the river that week, where Mercedes-Benz is the title sponsor.

“It gets us out of the city and puts it out to the rest of the country," he says. "And it has a broader appeal. Everyone knows Ryan Seacrest, and performers like Usher, Pitbull, and J. Lo. The show has a broad spectrum of talent, so the broadcast appeals to everyone.”