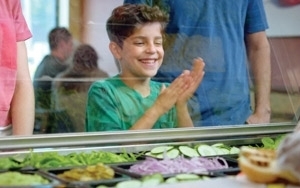 Subway is expanding its new strategy of running ad campaigns that spotlight core brand differentiators, in addition to its ongoing promotion-specific ads and other marketing efforts.

As previously reported, Subway launched its first brand-differentiator ads in early May. Those focus on its bread ("Bread is on the Rise at Subway"), stressing that it's made fresh in-store each day, and that it's been improved by the removal of some ingredients (like azodicarbonaminde) and the addition of vitamin D and calcium.

Now, Subway is introducing new creative — also from Boston-based agency MMB — that focuses on its vegetables, which will run in conjunction with the bread ads, Subway CMO Tony Pace tells Marketing Daily.

"In a very crowded and competitive marketplace, you need to do everything you can to stand out," sums up Pace, who confirms that the bread campaign's messaging has proved effective, yielding positive results in brand perception, social media pick-up and other metrics.

While Pace doesn't mention specific competitors, Subway's pioneering "Eat Fresh," healthy positioning has long been the key in differentiating it from other QSRs, and its new campaigns reinforcing the freshness, quality and variety of its ingredients come at a time when fast-casuals like Panera Bread and Chipotle Mexican Grill have also grown by leaps and bounds based on fresh, natural platforms.

The new ads invite consumers to "get your veggie on" at Subway, stressing the large variety of fresh veggies prepared daily in-store, and customers' ability to improvise "one-of-a-kind creation[s] bursting with flavor" by selecting their own veggie combinations for their sandwiches.

A 30-second television spot shows employees prepping vegetables, and a boy and his parents choosing veggies as their sandwiches are made in-store. The voiceover messaging emphasizes: "At Subway, we're seriously into veggies," and "we're all about finding unique veggies that give your sandwich even more life, like avocado, spinach and red onion."

(Spinach and red onion are among 10 standard, year-round veggie options, any number of which can be combined in a customized sandwich or salad at no additional charge, according to Subway. Avocado is available seasonally, and is the only veggie option that's an "add-on," with a small extra charge based on the sandwich size.)

The veggie spot debuted on prime-time on Aug. 3 and, in rotation with the bread spot, will continue to air frequently for some months across national network and cable. In both cases, the evergreen nature of the messaging means that the spots could, if desired, continue to be used indefinitely, or be brought back in the future.

While Subway regularly runs ads in USA Today highlighting current promotions and other timely, tactical messaging, the "differentiator" campaigns mark the first time in a couple of years that it has used magazines, says Pace. He says that print continues to be an effective part of the media mix, and that magazines in this case enable showcasing the full, colorful array of Subway's vegetables.

In addition to distributing elements and messaging from the veggie campaign via its social media assets, Subway will use paid digital advertising. These ads will include both traditional units and more novel formats, says Pace, who points to Subway's expanding roster of original Web series as one example of its focus on innovative digital marketing creative.

The veggie campaign ties in with Subway's three-year commitment to working with First Lady Michelle Obama's Partnership for a Healthier America to promote healthier food choices to kids. That includes campaigns that drive consumption of vegetables and fruits ("pile on the veggies" is a frequent Subway message) and its own kids' menu offerings, which meet federal nutrition standards for the national school lunch program.

In another recent campaign, Subway tied in with the Disney movie "The Muppets Most Wanted" with an online video and TV spot, Muppet-themed giveaways with Subway kids' meals, and in-store promotions like "Playtime Powered by Veggies" door clings highlighting the "choose your own veggies" message.