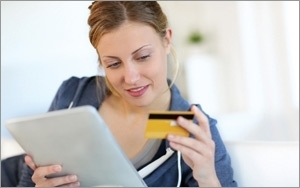 Asia-Pacific has the highest online buy rates -- China and South Korea are leaders in cosmetic products and groceries. Western Europe leads the way on CPG E-Commerce -- Britain has increased to $91M in Q1 2014 from $70M in Q1 2013 and France has increased from $32M to $42M in the same time period.

Compared to a similar study that Nielsen conducted in 2011, there are significant jumps in certain categories. Americans are now more open to buying in certain online categories including airlines, electronic equipment, ebooks, music and clothing/shoes.

There are several reasons that Americans are not more open to shopping online. Some 46% said they don’t like to buy online because of shipping costs, and 37% of Americans said they don’t trust giving their credit card information online.

The good news for brick-and-mortar retailers is that Americans still say we prefer going to retailers in person to buy our products. We will research online, but we still like to purchase in person, particularly for consumable products such as personal care, health and beauty, food and beverage, pet food and baby supplies.

The takeaway for retailers is that they can’t afford to ignore their consumers online -- online browsing and research is extremely important to consumers who often do the research legwork online before going to their local retail outlet.

“While online transactions make it easy to download a book, buy a ticket to a sporting event or book a hotel room, building a consumer base for consumable categories requires more marketing muscle,” said John Burbank, president of strategic initiatives, Nielsen, in a release. “Finding the right balance between meeting shopper needs for assortment and value, while also building trust and overcoming negative perceptions, such as high costs and shipment fees, is vital for continued and sustainable growth.”