Fox's 'So You Think You Can Dance' Is Still A Keeper 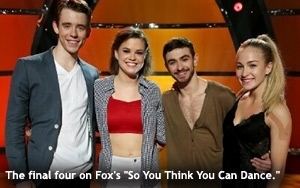 From what I gather, Fox’s reality competition series “So You Think You Can Dance” isn’t having such a great summer. Ratings are down, there doesn’t seem to be much buzz, and the media seems to think that after 11 seasons the show has run out of gas.

I don’t agree with them. I’ll admit to having missed the first few weeks of the season because of summer travel, but I started up with “SYTYCD” again in early August and have since enjoyed every minute of it. Last night’s two-hour competition between this season’s four outrageously talented finalists -- Zack Everhart, Valerie Rockey, Ricky Ubeda and Jessica Richens  -- was as exciting an installment of any reality series as I have seen this year. I would not want to be involved in determining which of the four will win the competition. Somebody should just give all four of these kids a great gig right now and be done with it.

A response of this kind generally means the competitors on a reality show were well chosen and truly deserved to be there. When, for example, was the last time anyone felt equally passionate about four final competitors on Fox’s “American Idol” or NBC’s “The Voice” or “America’s Got Talent?”

Having said all that, I’m going to state for the record that Ricky Ubeda’s dancing and stage presence last night had me thinking that I was watching a star being born whether he wins the competition or not. We’ll see what happens next week.

As always with “SYTYCD,” all of the dancers are very impressive and great fun to watch, the judges always offer interesting critiques and sometimes become emotional about what they have seen, and the production values are consistently dazzling. It is impossible to become bored while watching this show because the visuals change almost completely every few minutes. The costumes and lighting are also first rate.

The way the same stage is speedily transformed into a series of entirely new and different atmospheres from dance to dance is fascinating to see. And yet the show never feels overproduced the way “American Idol” has for the last two seasons and the way Fox’s “The X Factor” did from the beginning (which may help to explain why it never caught on).

I can’t comment on the dancing -- a subject I know absolutely nothing about. Fortunately, the judges generally critique the performances in a way that brings even the most clueless viewer into the process rather than keeping him at a distance, as sometimes happens on ABC’s “Dancing with the Stars.” In fact, one of the things I like best about this show is that even though Nigel Lythgoe and Mary Murphy and their rotating guest judges (including Jesse Tyler Ferguson, who ought to be made a permanent judge if his schedule permits) play a major role in the program, it never feels as though “SYTYCD” is all about them. Can that be said of “American Idol,” “America’s Got Talent” or “The Voice?”

I also appreciate the fact that “SYTYCD” continues to bring back dancers and choreographers from previous seasons to work and perform with each new group of competitors, and I think Cat Deeley is one of the most charming and energetic hosts of any reality series currently on television. I can’t imagine the show without her.

With all these positive attributes, what could possibly be going wrong here? Is “SYTYCD,” like almost every other long-running reality competition show, just wearing out its welcome? The show certainly isn’t tired -- at least not on the screen. And it doesn't over-play itself; it runs only one cycle per year and, this summer, only one night each week.

I wonder: Would the show have performed better this summer if it ran two nights a week for one hour each night? Would that build more momentum than a two-hour show running one night a week?

In addition, I can’t help but think there an issue with the voting process, as I believe there is with the fading “American Idol,” where the long-popular concept of viewers casting one vote at a time either by phone or online has been marginalized in favor of the “SuperVote” process, done via an app or online. What hope does anyone who prefers to simply dial a phone number and vote for a favorite contestant have against legions of SuperVoters? If you don’t think your vote will count, then why participate at all, or watch at all? I think the ongoing expansion of voting options, which varies from show to show, may be in part responsible for the overall decline of reality competition shows, along with the fact that they really lose something when viewed On Demand or via DVR or any other aftermath platform. They really need to be watched live and in the moment, a form of television viewing that television technology seems intent on rendering obsolete.

Maybe “SYTYCD” should be taken out of summer rotation and run during December and January -- two months that together are becoming a mini-season in the broadcast universe. That might be worth a try. Running it in the spring adjacent to “Idol” might also work, the production logistics could be an issue. I don’t really believe that Fox is going to cancel it, but I certainly hope the network finds a way to nurture it going forward. Like “Idol,” this is one reality show that is worth the effort.