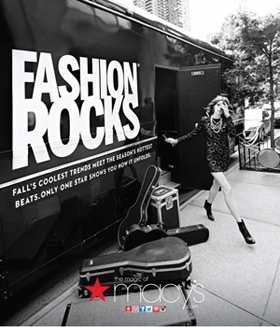 As it continues to flex its omnichannel strengths, Macy’s says it has finally begun marketing its click-and-collect services, and that it sees its future growth coming from Gen Y, mobile technology and exclusive products.

While the company has been testing this service for some time, “this has been somewhat under the radar and we are just now marketing this convenience, so we expect we will gain traction,” says Macy’s CEO Terry Lundgren in a presentation for investors at the Goldman Sachs 21st Annual Global Retailing Conference.

“We love this kind of sale, because [the customer has] already made her decision, she knows where to go in the store, and when she gets there, she almost always buys something else — spending about 125% of her intended order. And she doesn’t require a delivery fee.”

He says the Cincinnati-based retailer is continuing its investment into omnichannel strategies. “All of our stores can now ship directly from store to someone’s home,” for example, he says in remarks that were also webcast. “We have totally redone both Bloomies and Macy’s mobile space. My Wallet now lets them track their rewards. And we have a search and image technology that allows you to take a photo of something and find a similar item.

As the company continues to concentrate more on Millennials, adds president Jeff Gennette, it is also stepping up its commitment to expand private label, exclusive or limited distribution offerings, which it says already account for some 50% of its sales.

“Mobile devices are increasingly a conduit for shoppers, and it’s how they are checking prices, sizes, colors. In this era of price transparency, brands have to offer something different, some point of differentiation. It all comes down to the product.”

“We have to find more ways to create that unique product,” adds Lundgren, pointing to the company’s partnerships, such as its athletic shoe sales with Finish Line, hats with Lids, and its NFL Shop linked to last year’s Super Bowl, “which got $5 million in sales in one store, in one week. We could have never done that on our own. Those relationships pay off.”

Separately, Macy’s is partnering with Fashion Rocks for both the live event Sept. 9 celebrating Fashion Week, and a television special. (Performers scheduled to appear include Jennifer Lopez, Usher, Pitbull, and Miranda Lambert.) That will allow viewers to “shop live” for certain select fashions, via macys.com/fashionrocks. And a second-screen experience is available via the Shazam app, which the company says will include special Macy's content.