Hollywood film director and TV producer Robert Rodriguez is calling on the advertising industry to do a better job of showcasing diversity both in media and advertisements. "It seems every 20 years, advertisers try to tap into multicultural marketing and discover new ways to reach them," says Rodriguez. "But now, there's really the shift where the general market and multicultural market are the same, but [featured actresses and actors] still aren't that diverse."

Rodriguez is doing his part to better reflect American culture. The creator of “El Mariachi,” “Desperado,” “From Dusk Till Dawn,” “Machete,” and “Spy Kids” recently created and developed the network El Rey with the multicultural consumer in mind to deliver authenticity and relevance that resonate with today's culture.

Rodriguez spoke at Horizon on Wednesday (Oct. 1) to discuss the current state of the media and advertising industries. He also discussed how his new network, El Rey, is helping the industry better reflect the face of the United States today -- both in front of and behind the camera.

Advertisers don't necessarily have to treat Hispanic consumers much differently than the so-called mainstream audience. "Hispanics are really family-focused and values are important. These aren't that unusual traits," he says.

Horizon Media's Head of Multicultural Practice, Karina Dobarro adds that each brand does need to evaluate its own objectives to analyze whether it should speak to consumers in the Spanish or English language or both.

"As with any target, there are some brands that should be in the Spanish language, while on other occasions, it should be a combination of the two. Ultimately the business challenge is to connect with the consumer in-culture, but you can't make any generalizations."

The recent decision by Arnold Worldwide to merge its Hispanic with its general advertising division doesn't come as a surprise to some. "The media agencies went through something similar a few years ago," says Horizon's Dobarro. "Multicultural should be infused through everything these days, so you don't necessarily need a separate agency to develop creative. You hire multicultural experts to lead these agencies but everything should be integrated together."

Rodriguez adds that multicultural is the mainstream. "It's more about connecting with culture rather than [specific race/ethnicities]."

In fact, similar to mainstream consumers, Hispanic viewers tend to respond more favorably to product integration rather than traditional 30-second ads. And Rodriguez's network El Rey has a successful partnership with GM that features Chevrolets and Cadillacs integrated into the new cable network’s “From Dusk To Dawn” series. The deal includes video vignettes directed by Rodriguez that feature the show's cast.

Rodriguez also believes there are more opportunities for brands to get involved with Hollywood projects than 20 years ago. "If I were developing Spy Kids today, I would create at the same time a TV show, product line for children, educational products. You really create multimedia content." 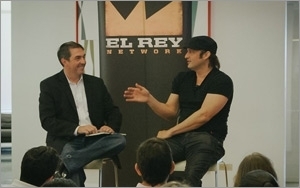