With Myriad Partnerships, Mazda Is Always On 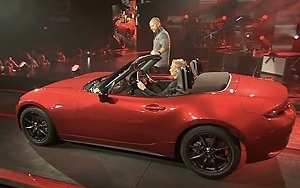 Mazda is not spending lots more money than it did last year, and probably not a lot more than the year before -- but you would think so based on the brand's "always on" strategy of keeping the consumer conversation going at a constant simmer, rather than spending big on getting a quick boil. Mazda has also been big on partnering with such music and culture events like CBS’s “Fashion Rocks” on Sept. 9; ESPN coverage of NCAA hoops; NFL Thursday night football; the Rock ’n’ Roll Marathon series, and SXSW, where Mazda will be official auto partner. Russell Wager, VP marketing, Mazda North American Operations, zooms in on strategy with Marketing Daily.

Q: You are partnering with NCAA and NFL this year. How are you doing that without getting lost in the noise?

A: We look at broadcast, and it’s flooded and it’s diluted. We ask ourselves how we can take ownership of that. We saw an opportunity to partner with the ESPN NCAA basketball halftime report. That has worked well, and we did lots of cross-promotions around it. So we are renewing that again this year. Again, we are the only one there.

Q: Philosophically, "Always On" means what?

A: What we have found from analytics is that it's better to sustain a constant discussion at a lower level than do a big burst and go dark. When we looked at it, we thought, sure -- we could have done a sponsorship with, say, the NCAA tournament for a few weeks or we could keep up a partnership and a conversation for several months. It's about being ongoing and it involves everything from broadcast to digital to a print presence. Because at any point in time in a month, only 1.5% of people are in-market for a car. So if we come in and out, we are going to miss that. Always on means we are talking to everyone pretty constantly.

Q: What's "Always On" about the ESPN partnership around NCAA half-time?

A: First of all, no matter what game ESPN is broadcasting, everywhere, across the country, when ESPN is carrying it, feeds go to the Halftime Show desk where the recaps are shown. So we have exclusivity with that. No other auto brand has it. And it's from the very beginning of the season — from this month through the NCAA tournament. But we stop short of the tournament, where lots of automakers dive in.

Q: But NFL is pretty packed with brands from beginning to end. How are you finding elbow room there?

A: We started early this season, sponsoring the NFL Thursday night post game. NFL is the number-one-watched sport and most expensive, and every manufacturer has some sort of relationship there. So when NFL offered Thursday night we said we had to get into it. Because there's nobody in it but us.

Q: Looking at programs you’ve been doing, is the goal to get big awareness?

A: Awareness isn't something I'm chasing. That's spend-based. You can influence it, but if someone outspends you, they win. That said, since we started "Game Changer" [Mazda’s umbrella marketing campaign launched in 2013], our awareness is actually up about 4%, with spend up only a bit. Sixteen days after Fashion Rocks, we had 10,000 hand-raisers [for the 2016 MX-5 Miata.] A quarter of a million people watched the 20-minute video of the MX-5 reveal with [rock band] Duran Duran in Monterey, which was limited to 500 enthusiasts, journalists and dealers.

Q: If it’s not awareness, then, what’s the end game?

A: I'm trying to reach that middle portion of the funnel, making people more familiar with the brand, raise opinion and consideration. All of these. Since the beginning of "Game Changers" familiarity is up over 14%; opinion is up 20%; and consideration is up 25%. A lot of these metrics we get from GfK, and they say they have not seen opinion move this quickly in an awful long time. [An always-on strategy] is giving us a presence larger than we really are.

A: The challenge is sustaining that momentum.