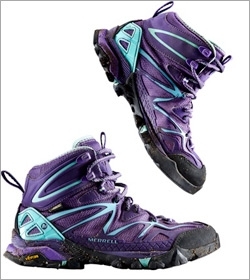 To introduce its latest hiking boot, designed to appeal to hip urban hikers, Merrell has teamed up with Oculus Rift to create Merrell #TrailScape, a virtual-reality hike experience at the Sundance Film Festival.

The immersive experience is the first-ever commercial use of this “in motion” virtual reality, says Jamie Mandor, global brand marketing lead for Merrell. “Merrell has always been a brand that enables experiences. And we realized this this is a way to inspire them.”

To pull it off, Merrell, based in Grand Rapids, Mich., partnered with Framestore, which created the in-goggle experience. After putting on the goggles and helmet, guests feel the are transported to a trail high in the Dolomites, “where a tour guide walks them along treacherous rock ledges and a wood suspension bridge between peaks,” she says. “We used this as a fun, no-risk way to create their own Oculus Rift experience.”

The event is part of an introduction for the Capra, a new hiking shoe, named after the Capra goats found in Italy’s mountains (the word “capra” means goat in Italian). And it’s intended to appeal to adventurers between “25 and 40, who live in urban areas and are really strapped for time. But they want to collect experiences. We see a huge opportunity as a brand to change the way we speak to them,” she says. And the Capra shows that urban spark. “It’s versatile, with modern bright colors, and it’s very light weight.”

Introducing the shoe — and the high-tech hike experience — at Sundance made sense, she tells Marketing Daily. “Sundance is in line with the Merrell idea of independent thinking and adventure. We saw the opportunity to launch a new product and inspire people to get outside and try an adventure in a different way.”

The Sundance event, which will likely allow between 700 to 1,000 “hikers” to have the Oculus Rift experience before it wraps up, also includes a partnership with Rolling Stone and Wenner Media. And while plans aren’t firm yet, she says the company intends to take the experience on a tour of retail stores this year.