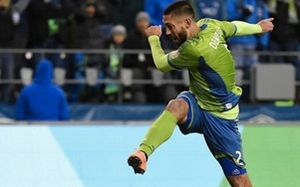 In its new role as Official Snacks of MLS, the company will activate across all media for its cookie, candy, cracker and gum brands like Oreo, Chips Ahoy, Ritz, Wheat Thins, Honey Maid, Newtons, Belvita, Trident, Dentyne, Stride and Sour Patch Kids.

The program focuses on retail activation and shopper marketing as well as consumer promotions, and has a big social media component. Mondelez also gets rights to activate at the AT&T MLS All-Star Game, and the MLS Cup, MLS' championship game.

Noting that soccer in the U.S. is at something of a tipping point, Stephen Chriss, senior director, North America consumer engagement and marketing services at Mondelez International, tells Marketing Daily that Mondelez’ snack brands are a natural fit both for spectators and participants. “[Soccer] is one of the fastest-growing participatory sports, and we are part of the snacking moment.”

He says soccer at this level is a natural for Mondelez because it helps its brands reach the Hispanic market. “It is clear we need to be able to understand and speak with Latinos, who represent one of the fastest-growing demographics. But we are also reaching out to moms with kids, in both the multi-cultural and general markets, and the Millennial consumer.”

As part of the partnership mediated by CAA Sports Consulting and Soccer United, Mondelez also gets to sign deals with individual players and league “ambassadors.”

Last year the company also signed a deal with Mexico's Club Deportivo Guadalajara (a/k/a Chivas), along with individual relationships with players Omar Gonzalez of the L.A. Galaxy, Clint Dempsey of the Seattle Sounders and Alex Morgan of the Portland Thorns women's team. The U.S. Women's National Team plays this year in Canada.

The latter includes a second iteration of the #PassTheLove social campaign, the largest multi-brand effort from the company ever, which launched before last year's World Cup. The campaign encourages consumers to share on social media what they love about soccer. Mondelez promoted it on tens of  millions of packages across multiple brands. There was also a dedicated passthelove.com website and some 17,000 in-store displays. Chriss says that program will kick off again this summer.

Mondelez also has sponsorship associations with NCAA March Madness and NASCAR. “There are several times through out the year in addition to sports where we can play in culture,” says Chriss, adding that back-to-school is one example, a period where Mondelez snack brands tie in with music, via association with top bands.

“My strategy for organization here in North America is to put our brands in that cultural conversation,” he says. “I often a say we want to play in culture, and if you want to do that you need to be where the consumer is talking, and there are many of those spaces. It’s not just a ‘ubiquity’ strategy, but a snacking-occasion strategy.”