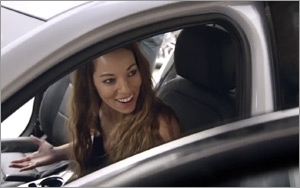 Chevrolet is launching a new brand campaign under its “Find New Roads” banner, and featuring real people. In fact, that's what it's called: “Real People. Not Actors.” The effort, intended to build brand consideration for cars and crossovers in the lineup, involves 400 people in Los Angeles who don't own a Chevrolet.

These people then were divided into focus groups and shown Chevrolet cars and crossovers with reactions, then the subject of the new raft of TV commercials, and YouTube videos. A teaser ad for the new campaign shows a group of real people in a focus group room watching a windshield view from a car driving down a road. They are so absorbed in the video that when a pair of half-rotted “Walking Dead”-style zombies stroll in and threaten them, they ignore them totally.

The actual spot in the campaign sets up the same circumstance, except we see the group instructed not to take their eyes off the road for any reason. This time a guy starts drilling into the wall, a pair of cute puppies run in, a pair of wrestlers crash through the walls. And this time the audience, clearly not warned, are distracted. The message is about texting, and how Chevrolet’s vehicles feature a new technology that lets drivers avoid that illegal and dangerous hobby via one-button text response: “Call you later, I'm driving.” The Spanish-language spot has the same setup but with a different focus group and distractions.

Another of the new ads focuses on the vehicle experience, with participants inside the cars and crossovers comparing the Malibu, Cruze, Equinox and Traverse to brands like BMW, Audi, Land Rover and Lexus. The subjects are not told the vehicles are Chevrolets until the end, when they react with pleasant surprise, and mull putting Chevrolet on their consideration list. Commonwealth/McCann handles, with sibling agency for the Hispanic market Casanova Pendrill (which replaced LatinWorks on the account last year) doing Spanish-language ads.

“The goal is to capture the spontaneous reactions of people as they’re exposed to today’s Chevrolet,” said Paul Edwards, U.S. vice president, Chevrolet marketing, in a statement. “People are immediately surprised and enthused when they experience our vehicles up close -- the designs, technologies, and quality levels far exceed expectations.”

Chevrolet says the campaign’s first spots, in English and Spanish, will premiere during high-profile network and cable television programming on April 1, then continue on retail, digital and social platforms, displays and activations throughout the year.

The automaker has also partnered with Disney around the upcoming sci-fi film “Tomorrowland,” starring George Clooney to tout, not surprisingly, the 2016 Chevrolet Volt and EN-V concepts, which will be shown in New York this week.

Premiering on May 22, “Tomorrowland” refers to a futuristic Oz-like place in an alternative reality. A co-branded digital effort and TV spot launch in early May, per GM. In a release on the partnership, GM also notes that Shanghai General Motors has partnered with Shanghai Disney Resort making the regional GM arm a Shanghai Disney Resort long-term strategic alliance participant, as official vehicle of the park.