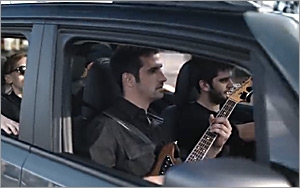 Jeep's most iconic nameplate — and therefore FCA U.S.'s most iconic vehicle — is the Jeep Wrangler. But another vehicle, the Jeep Renegade, is the brand's most worldly: the vehicle, which launched in February, is the first model under the all-American nameplate to be built overseas — Melfi, Italy, to be precise, where it shares a platform with sibling Fiat 500X. It is also a subcompact crossover, which means it has an automatic Millennial appeal. And the automaker is counting on that.

Jeep has been pitching 20-somethings since earlier this year when it launched a program with NBCUniversal and iHeartRadio spotlighting, among other things, artists like Hozier and Charlie XCX.

Jeep is extending the music focus with a new marketing campaign featuring a song called "Renegades" by Brooklyn-based band X Ambassadors. The effort — which includes print, radio, experiential, social, long-form video, and other digital elements — kicked off on Friday with a 60-second spot.

The music video for the song is on Jeep's YouTube channel, while the lyrics are on Jeep's microsite for the vehicle, at www.Jeep.com/RenegadeLife. The 60-second TV launch spot features footage of the band using the Renegade as a tour vehicle for a national trip. They travel around the country with other Millennials, as the song plays, with the lyrics saying “Long live the pioneers, rebels and mutineers, go forth and have no fear, come close and lend an ear."

In a statement, FCA's global CMO Olivier Francois said that the campaign — a collaboration between the band and its producer KIDinaKORNER (Alex Da Kid) and Interscope Records — is intended to reach younger consumers whose attentions are probably otherwise engaged, probably by other marketing messages. “Building break-through creative to launch the Jeep Renegade to the Millennial audience around the world propels the Jeep brand into an all-new space,” he said. “We’ve created a one-of-a-kind platform that features lyrics and track written with the modern renegade in mind — its name invoking the very spirit and mindset of Millennials.”

The new music platform for the 2015 Jeep Renegade will be applied across the brand’s social, digital and website channels. Jeep says the new Jeep.com/RenegadeLife microsite is intended to be a lifestyle portal, and will be updated with rich-media content, per Jeep.