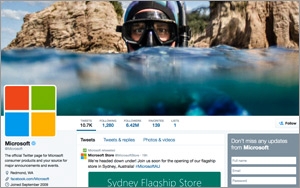 In the 30 days after the U.S.-based campaign, Microsoft tweets increased 41% from those who sent tweets about at least one prime-time show that Microsoft ads aired within.

By contrast, conversation around Microsoft tweets declined 38% from those who did not send any tweets about shows the company's ads had aired in, Nielsen found.

Meanwhile, Microsoft’s TV campaign contained two distinct types of creative. One was emotional and tugged at the heartstrings of viewers, while the other was more rational with creative that focused on the product’s competitive benefits with price as a call to action.

Seventy-six percent of those respondents say that connected TV streaming is just as good as -- or better than -- traditional TV, while 51% say it is “as good” and 25% say it is “better.”

The understanding that paid media can significantly drive earned media for a brand has two major implications for TV advertisers, according to Deirdre Thomas, SVP of client solutions at Nielsen.

“The first implication is that it’s important for those TV advertisers to factor social TV activity into their TV media planning and buying process in order to maximize the earned media impact of a TV campaign,” Thomas said on Monday. “Second, the findings explain that it’s also critical for those advertisers to be smart about their creative.”

The Nielsen Social “cohort analysis” used in the first part of its study to determine brand lift measured the volume of Microsoft-related tweets from two distinct groups during the 30-day period before and after the Microsoft TV campaign aired on a national prime-time TV schedule.

“Exposed” TV authors were Microsoft authors who sent tweets about at least one show that Microsoft ads aired in within the prime-time TV schedule analyzed.

Control group authors were Microsoft authors who did not send Tweets about any of the shows that Microsoft ads aired in within the prime-time TV schedule analyzed. As Nielsen notes, some authors within the control group may have been exposed to ads without tweeting about program content or ads placed outside of the analyzed TV schedule.