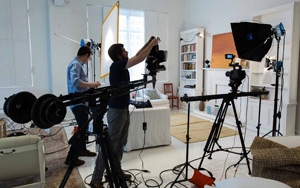 With billions of pieces of data collected daily from searches on its site, About.com has launched a data-backed content creation lab it calls IDEA Studio, supported by more than a dozen creative team members and several data PhDs.

The group will take on advertising conglomerates like WPP, which recently launched Truffle Pig, and video creators at YouTube that have been creating content for years.

This project ties content and data to advertising placement and predictive timing.

About.com built a studio a few blocks from its main office in New York City that Neil Vogel, the company's CEO, said will rely on data from searches to build and place advertising across its network. "The world doesn't need another content studio," admits CEO Neil Vogel, but it does need one with a data-intensive strategy to help marketers target messages.

Vogel expects Walgreens to launch a custom content program soon through the IDEA Studio, but skipped the details.

About.com visitors don't search the site to browse. They come to learn, fix or make something, such as how to cook coconut chicken soup or make a table. The majority of the traffic to the site comes from search engines, but the company has linked together entities, similar to the way Microsoft Bing, Google, and Facebook built their own knowledge graph.

Jon Roberts, VP of data science at About.com, which joined about 1.5 years ago, said the company has begun tagging keywords, about 42 million, and tracked 500 unique entities. The network links questions to more than 3 million pieces of content for brands like Symantec, Disney and Walgreens, among others.

It also required About.com to map content across the site to understand intent. Data around one piece of content can estimate what the person will look at next.

The project based on data allows About.com to place ads for companies, such as Forever Mark, contextually down the marketing funnel in places where they're ready to make a decision. Roberts said the data finds correlations and causations. "When America goes to war, people come to the site looking for political humor," he said. "In 2001 data, there was a huge rise in interest about Islam, and a huge rise in traffic to the weight loss site. It lasts one month."

About.com visitors don't search the site to browse. The majority of the traffic to the site comes from search engines looking to learn, fix or make something such as how to cook coconut chicken soup or make a table.

The searches for chicken soup might become heightened around cold and flu season. Roberts said About.com has 138 topic sites for cold and flu, as well as pediatrics and pregnancy and work related topics. In the fall, people are interested in preventing the flu, but by December, the interest changes to dealing with the flu. Most want to know "how long is it contagious," before the interest shifts in the spring to summer colds.